US right to work laws – ‘collective punishment’ against US unions. 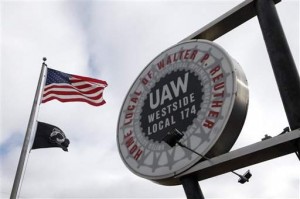 Late last year 2012 the right wing Republican administration in Michigan, forced through legislation in the face of union opposition and in the teeth of a demonstration of 10,000 union members to make the state a ‘right to work’ state.

For union members in the Uk and Europe the ‘right to work laws’ remain a mystery. But there is no mystery about why states such as Michigan, Indiana and Ohio have pushed through the legislation.

They were the battleground states where organized labour placed their firepower and delivered for Barak Obama.

So what does ‘right to work” mean? The phrase dates back to 1902. It sounds like a guarantee of employment, but it has nothing to do with whether you’re guaranteed to have and hold a job.

A ‘right to work’ law states that employees cannot be compelled to pay union subscriptions, even if they are covered under a ‘union contract’. Even if a union is operating in a given workplace and negotiating collective agreements, workers cannot be forced to join the union – even though they will get the benefits of wage agreements and better conditions. It is in effect a ‘free-riders charter’.

Before 1947, ‘right to work laws’ were not possible, but that changed with the passing of the Taft-Hartley Act, which outlawed the ‘closed shop’ which restricted employment to union members only, and required union membership as a term of employment.

The Wall Street Journal has suggested that right to work laws promote job growth. But in effect they entice companies away from states without such laws with promises of lower wages and weak unions. Even the WSJ admitted that that ‘right to work’ states have lower wages and less favorable employment contracts, because the collective bargaining power of unions is diluted.

In the USA administering and running unions is costly and the process of negotiating periodic contracts can be painstaking and expensive, as can providing benefits for union members. Lockouts, strikes and concession bargaining are not unusual. However, if everyone in the union pays subscriptions, costs can be kept lower for all members, and every worker has equally invested in the union.

Free-riders create an imbalance – when union and non-union workers are covered under the same negotiated contract, it means that the free-riders get the benefits of union membership for free, weakening bargaining power and allowing employers to reduce labour costs

The White House said that Obama opposed right-to-work laws, and the president has personally spoken out against them stating: “The so-called ‘right-to-work’ laws – they don’t have to do with economics, they have everything to do with politics. What they’re really talking about is giving you the right to work for less money.”

The extension of right to work laws in these key states amounts to a right wing collective punishment – egged on by extremists in the now discredited Tea Party and big business against organized unions.