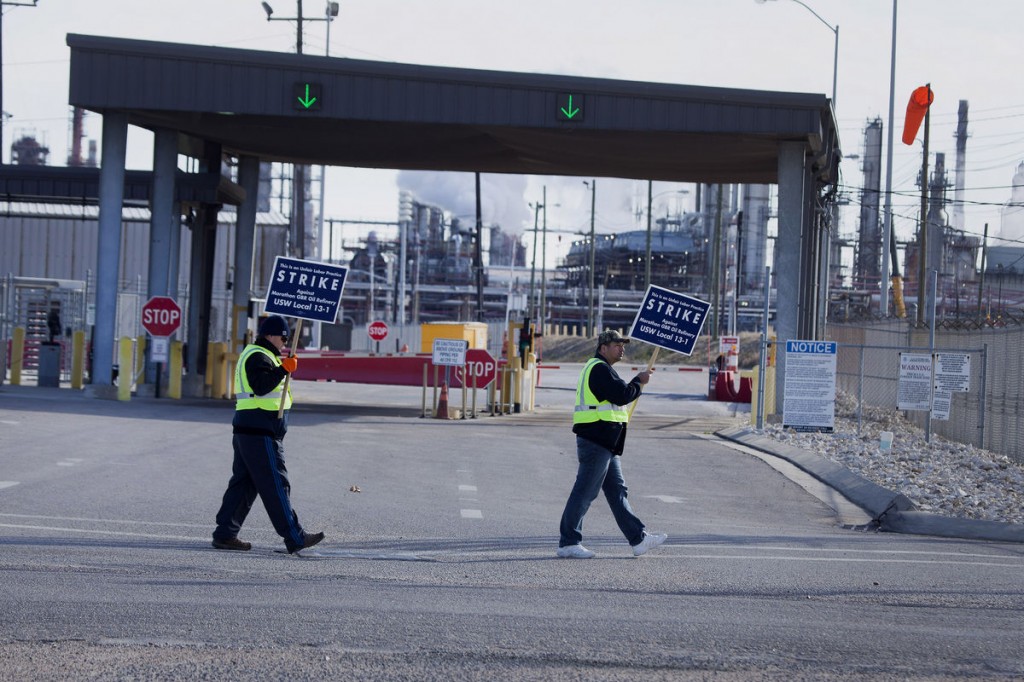 The United Steelworkers (USW) who represent thousands of striking oil refinery workers have said that workers at BP Refineries will be hit by strikes today (Sunday) in the next wave of industrial action which has speed across the US oil industry.

BP’s Whiting, Indiana and Toledo, Ohio refineries are joining the union’s ‘unfair labor practice strike’ against the oil industry that began on February 1s after the companies failed to address serious concerns regarding the health and safety of workers and their communities.

The union gave BP management notice on February 6th that about 1,100 members of USW Local 7-1 at the Whiting refinery and some 340 members of Local 346-3 on Saturday would join nearly 3,800 USW oil workers already on a ULP strike at nine refineries in California, Kentucky, Texas and Washington.

The strikes are the first held in support of a nationwide pay deal since 1980. The plants on strike account for more than 10% of U.S. refining capacity. Some refineries are already at a standstill.

Royal Dutch Shell, is the lead industry negotiator who walked away from the negotiations after demanding that the union withdraw claims in relation to healthcare.

“Shell refused to provide us with a counter-offer and left the bargaining table,” USW International President Leo Gerard said. “We had no choice but to give notice of a work stoppage.”

Watch Leo Gerard explain the US Oil Strikes in this interview with Ed Shultz of MSNBC.

The expiring three-year national contract covers 30,000 hourly paid workers at plants that together account for two-thirds of U.S. refining capacity.

Leo Gerard said that the oil industry is long overdue to address many of the issues the union brought to the table that directly impact workers’ health and safety.

“We are absolutely committed to negotiating a fair contract that improves safety conditions throughout the industry,” Gerard said. “Management cannot continue to resist allowing workers a stronger voice on issues that could very well make the difference between life and death for too many of them.”

USW negotiators are determined to resolve the members’ central issues.

“In addition, Shell has failed to accept the “no-retrogression” language that refers to acceptance of previous agreements with the industry,” Beevers added. “We will not relinquish 50 years of progress in NOBP bargaining.”

“It is amazing that an industry—which has such a potential for danger both in the workplace and within the surrounding communities of their facilities—is refusing to engage in any serious dialogue with their work force about issues which are central to their mission and the development of a qualified, well-trained work force to meet future needs.

“Accordingly, the USW has been compelled to expand the ULP strike to now include 11 refineries around the nation,” Conway added. “The USW urges the industry to begin to engage in a more serious dialogue.”

Workers at the BP facilities in Whiting, Ind., and Toledo, Ohio, will join the ULP strike at 12:01 a.m. (today) Sunday morning.

Negotiations between the USW and oil industry representatives are on a temporary hiatus, while the USW waits for the companies to comply with a long pending information request.

Messages of support to striking oil workers and the USW can be sent to pyoung@usw.org