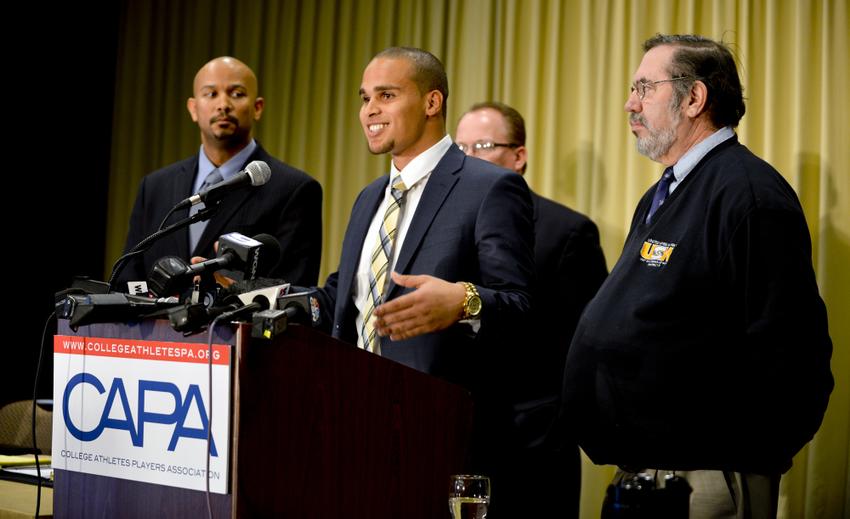 The world of sports in the USA has been rocked by a decision of Northwestern collage football players (US style football that it – not soccer!) to form a union and seek union recognition using the USA’s system for determining union representation.

This week they voted on whether to form the first union for college athletes – which is being described as a decision, which could change the landscape of US amateur sports.

As can be expected, the US media has gone into overdrive with talk of strikes, pickets, threats and appeals to the players.

To most people outside of  North America US college sports remains a mystery – but the argument put simply is this: the ‘amateur’ collage football players are technically employees playing football for the college full time and therefore have a right to form a union.

These are the football players who form the ‘draft’ to be picked for the professional US football teams.

Leading the campaign to form the College Athletes Players Association is Kain Colter Northwestern University’s quarterback from 2010 – 2013, captain of the side who is preparing for the ‘draft’. Activist Ramogi Huma one time football player and founder of the National College Players Association, an advocacy group launched in 2001 and President of CAPA has assisted him.

Also helping out are the United Steelworkers who have been assisting the college players in setting up the union and preparing for the vote. USW’s Tim Waters said: “We started lifting the rock and found out it’s pretty nasty”. Also as expected the Steelworkers involvement has attracted comment in the media that the union wants to run collage football and will interfere by calling strikes, stopping practice and training and the CAPA will eventually form USW “football locals”.

CAPA filed to form a union at Northwestern. They were able to do this when the regional director of the National Labor Relations Board (who adjudicate and conduct ballots on union representation) allowed a vote to go ahead. The union is seeking guaranteed scholarships, medical care in the long term, possible future payments beyond scholarships and stipends.

As with most US labour issues it has gotten complicated.

Although the vote among the players has gone ahead, anti-union forces came into play to frighten the players into voting against forming a union. Northwestern says the players are students and are not employees. They say: ”Unionisation and collective bargaining are not the appropriate methods to address the concerns raised by student-athletes.”

Northwestern has filed an appeal so the results of the unprecedented vote won’t be revealed soon. The ballot boxes will be sealed for at least four weeks. This could be followed by a legal battle in the courts.

Although the players were filmed participating in a ballot, none of them talked to the media but they waved or thrust their arms into the air in view of TV news cameras.

Cheering them on was Fred Massey, a former high school basketball coach from Detroit who is an advocate for student-athletes.

“These kids are afraid to rock the boat because as athletes. That big dream of the NFL and the NBA is being dangled in front of them with all the millions of dollars,” he said. “So, you just do what you’re told. They don’t want to jeopardise that.”

More interesting time for the US labour movement!

NB: The United Steelworks and Unite are partner unions in the global union Workers Uniting covering UK, Ireland, Canada and the USA.