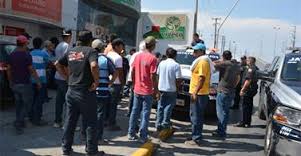 Further to previous reports on this site workers at Teksid Iron of Mexico have lifted the work stoppage that began last week after approving, in an ‘impromptu assembly’ (mass meeting), an agreement signed between the Metal and Mineworkers’ Union (Los Mineros) and the company, whose managers accepted ‘free union affiliation’, much to the “distress” of the yellow union imposed by the company the CTM under the leadership of José Dimas Galindo.

Los Mineros union spokesperson Imelda Jimenez, and counsel of the National Executive Committee of Los Mineros, Oscar Alzaga Sánchez, led the ‘assembly’ in which the leader read the agreement which was reached with Teksid Iron Mexico.

The lawyer explained that the next step of Los Mineros will be to file a collective bargaining demand with the Federal Conciliation and Arbitration Board to dispute the  CTM’s control of the  Collective Bargaining Agreement, which has been held by  José Dimas Galindo since 1996 when Teksid Hierro  operations started.

Jimenez said the agreement now commits the company to reinstate the workers Marisol Ruiz Moreno, Orlando Montoya and Oscar Rodríguez Ponce, who had been dismissed as a reprisal since the previous Friday, when a strike was launched to protest the reduction of profit-sharing payments to 7,000 pesos and to reject the yellow union CTM.

She added that by the end of this week the company will make the profit-sharing payments, and that it will maintain full respect for the free association of workers, refraining from intervening in union affairs, and taking no further reprisals for the work stoppage in addition to not unleash further violence by the work stoppage.

“The work absences on April 19th, 20th, 21st and 22nd will not be counted as faults, and Teksid Hierro de México will withdraw the lawsuit that was brought to the labor courts, however there will be no payment of back wages,” it was reported at the meeting held outside the factory with a heavy police presence .

For more information click on the link above and read how the strike started and unfolded.