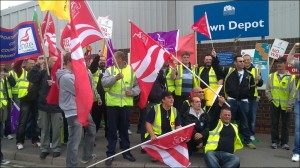 Mark Wood, the Unite Convenor at Southampton City Coucil sent us this appeal for support for the own going dispute and fight against the duts of right-wing Southampton City Council. Here is Mark’s appeal to all trade unionists, activists and Unite members:

“Strike action across the City is continuing. There have been strikes in Street Cleansing, Parking Operations, Vehicle Workshops and the Itchen Bridge, with industrial action short of strike continuing throughout all service areas. 160 Refuse Collection and Street Cleansing workers will be on strike as part of the ongoing dispute over pay cuts. While cutting the pay of social care staff by 5%, the City Council responded to the threat of mass resignations of Child Protection Social Workers by making a “market supplement” payment to them of £1400 a year. For newly qualified Social Workers, this payment was equivalent to the 5% pay cut, for more experienced workers, it is less than they are having taken from their pay in the first place. This £1400 payment has caused widespread anger among all social care staff. It is not being paid to all Social Workers in Children’s Social Services and is not being paid at all in Adult Services. Two mass meetings of social care staff were held in July and both voted to strike.

In addition to the one day strike, groups of social work staff in Adoption and Fostering are to start a period of extended strike action from 4th August.

Legal Action against the council: The collective Employment Tribunal against the Council, taken out by Unite and Unison for failure to consult on the dismissals, is not expected to be heard until 2012. This is because the Council has claimed that the hearing will take between 5 and 6 weeks. The union has started drawing up individual unfair dismissal claims (Individuals have until 9th October 2011 to submit a tribunal claim for unfair dismissal).

Talks between the Council and Unite and Unison are continuing. Along with me and John Early, Ian Woodland (Unite Regional Coordinator) has been present at these meetings. The Council has still not revised their proposals and the prospect of resolving the dispute remains uncertain.

A mass meeting is arranged on Wednesday 10th August at 12.30pm in the Above Bar Church Hall. The meeting will consider future strategies regarding industrial action.

Can all trade unionists please send messages of support to Mark and our members on strike. Click here

*NB: this is a Unite fund. A long-standing TGWU account is being used to ensure there is no delay in supporting the workers.