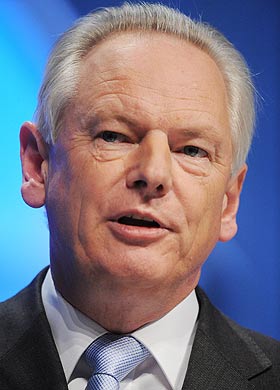 Francis Maude: "A typical public sector worker would have to work three working lifetimes to earn his pension"

Ahead of the public sector pensions strike next week, Unite has published a ‘dossier of hypocrisy’ exposing the pensions of cabinet ministers at the heart of the coalition’s attack on public sector workers.

Unite’s pensions experts have examined the pensions of Deputy Prime Minister, Nick Clegg; Chancellor of the Exchequer, George Osborne; Business Secretary, Vince Cable; Minister for the Cabinet Office, Francis Maude; Chief Secretary to the Treasury, Danny Alexander; Secretary of State for communities and local government, Eric Pickles and Secretary of State for Health, Andrew Lansley and compared them to typical public sector workers who face a massive attack on their pensions.

The calculations are based on ministers’ pension pots if they were to retire at the end of the current term of office in 2015.

George Osborne the architect of the government’s austerity programme would only have to work a year and a half to earn a typical public sector workers’ pension of £5,600 in retirement.

A local government worker would have to work an staggering 124 years to get a pension equal to what Eric Pickles could retire on in 2015, and Andrew Lansley’s pension is almost ten times bigger than an average health worker who is accused by this government of having a ‘gold-plated pension’.

Unite general secretary, Len McCluskey said: “A typical public sector worker would have to work almost three lifetimes to get a pension like some of these ministers who are attacking our public services. And it doesn’t include all the other lucrative business arrangements and inherited wealth many of them enjoy.”

“Unite supports good pensions for all workers including MPs, what we don’t support is a cabinet of millionaires attacking the very modest pensions of the men and women who care for our sick, teach our children and keep our streets safe.”

“It’s another example of how out-of-touch the government is. Ministers, who can retire on tens of thousands a year, are slashing the pensions of workers who stand to get a few thousand a year and then have the nerve to call them gold-plated.

“The government must stop trying to turn people against their neighbours, friends and colleagues who work in the public sector. Start acting responsibly by getting back round the negotiating table to talk seriously about a fair deal for public sector workers.”

Fewer than one in 10 people believe public-sector pensions are “gold-plated” and are more likely to trust trade unions than the Government on the issue, according to a survey released yesterday by the polling company Survation.

A poll of more than 1,000 adults commissioned by Unite before next week’s strike by public-sector workers showed that unions were three times more trusted than the Government for providing accurate information on the affordability of public sector pensions.

Only 8% of those questioned said they would regard a pension of GBP6,000 a year – the average for the public sector – as gold-plated.

Almost nine out of 10 people said politicians and company bosses were not making enough sacrifices in the current difficult economic times while most believed nurses, teachers and refuse collectors were doing enough.