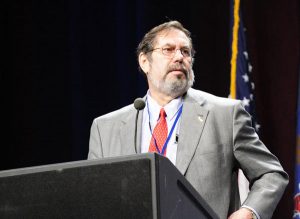 “President Trump’s decision to withdraw from the Paris Agreement is an inexcusable blow to the U.S. economy. The agreement is ambitious, nonbinding and transparent, and it stands as a landmark global achievement in the fight against climate change.

“For many years, the United States has been a leader in innovation and technology to combat climate change. Withdrawing from this non-binding agreement further cedes our strength in this sector to China, and signals to domestic innovators and manufacturers that the United States will not support them.

“Our union, through our partnerships in the BlueGreen Alliance, has been a leader in ensuring that jobs are good for workers and good for the environment. Today’s announcement is a threat to innovative, green jobs in the United States. Americans do not have to choose between good jobs and a clean environment. The USW has long believed that America can have both. Most American industries already meet the requirements of previous international climate agreements.

“Climate change is a critical concern across the globe. The diplomatic and trade impacts of withdrawing will be felt for many years, as the United States joins the only two other countries who are not part of the agreement—Syria and Nicaragua.

“The Administration made this choice despite the overwhelming evidence of the impacts of climate change and the near universal support for the agreement by labor, environmental, and business leaders.

“President Trump should immediately reverse his decision to protect the planet and jobs for workers in the United States.”

Here is how Trump joining only Syria and Nicaragua in rejecting the global climate accord will play out. Our trade deficit will grow as the world comes to perceive our manufacturing processes in the US as harmful to the planet.

The perception will be that buying a car, a roll of paper, pulp or anything else from the US will bring more harm to the planet than buying it from ANYWHERE else. In fact people will pay a premium for products as global awareness increases. Even companies that have made huge strides in sustainability here will be viewed as guilty by association. In fact, this idea will be the center of an anti-US goods marketing strategy in some places.

Even China understood this and it is why they are spending almost a trillion dollars on carbon mitigation to show the world they are changing. When that becomes the global consensus the first victims of this will be American workers and American companies. We will all pay a high price for this.

And our children will pay the most…..(Incidentaly Nicaragua didnt support the accord only because it hinged on voluntary pledges and would not punish those who failed to meet them–so it is really only the US and Syria)