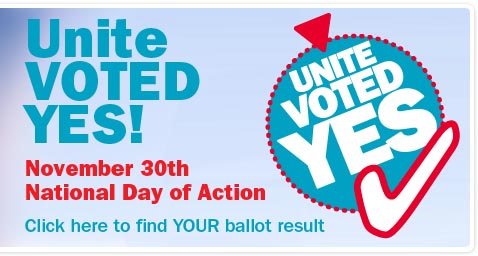 Members of Unite working in the public sector have voted resoundingly in favour of industrial action to defend their pensions.

Three in four Unite members have said YES to joining the national day of action on November 30th.  In Unite’s three main aggregate ballots of health, civil service and local authority workers, 75% of Unite members voted in favour of action on a turnout of 31%.

Unite’s members are now set to join millions of fellow public sector workers whose unions have already returned a YES vote, supported by the major medical professional unions which have pledged their full backing for the day.

The vote heaps further pressure upon the government to rethink its plans to force public sector workers to pay more and work longer, but for a poorer pension in retirement.

“Yet again public sector workers are telling the government that `enough is enough’. They have endured wages cuts, rising living costs and horrific job losses, as this government forces the less well off in this country to pay for the sins of the elite. They are not prepared to stomach this attack on their pensions, too.

“This is the courageous defence of their savings by the backbone of this country; the people who day in, day out, care for our young, our frail, our elderly, our homes, streets and parks; the people who, after decades of loyal service to this nation, will be lucky to have £5600 per year to live on.

“One in five people in this country – some 12 million adults – either pay into or are in receipt of a public sector pension.  Now this government wants to take that away from them, forcing families to find in many cases hundreds of pounds more per month for their pension, at a time when simply making ends meet is so tough.

“On November 30th, we fully expect millions of public sector workers and their supporters to show their disgust at the government’s plans.  If the government seriously wants to avert a long dispute and heal the divisions it is causing, it needs to get back round the table with some sensible plans for solving the problems it alone has caused.”

For all public sector workers in England, Scotland, Wales and Northern Ireland, the change in the way the pensions are calculated from RPI to CPI will see 15% automatically wiped off the value of pensions.  Unite is one of a group of unions currently challenging this move in the High Court.