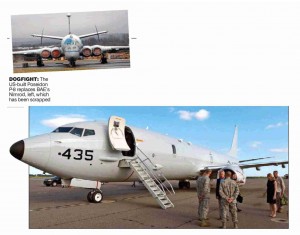 Defence secretary Michael Fallon has serious questions to answer about the UK’s secretive procurement policy – the latest controversy being the decision to buy nine maritime patrol aircraft from America.

The deal to purchase the nine Boeing Poseidon P-8A  patrol aircraft, estimated to be worth $3.2bn, without competitive tendering, is expected to be signed at next month’s Farnborough air show which takes place between 11th -17th July.

Unite, the country’s largest union with about 70,000 members across the aerospace, defence, and shipbuilding industries, is raising serious concerns about the lack of ‘offset agreements’ in the proposed Boeing deal, work that could be earmarked for British defence firms to safeguard skilled jobs.

This flies in the face of chancellor George Osborne’s commitment to “unashamedly back … a British success story … like aerospace”.

The current imbroglio comes as a result of the coalition government’s ‘rash and short-sighted’ decision to scrap the Nimrod Maritime Patrol Aircraft, as part of the 2010 Strategic Defence and Security Review (SDSR) at a cost of £4bn to the taxpayer and the loss of 1,400 skilled jobs.

This left the UK as the only major maritime nation without the capability to patrol its own waters with modern reconnaissance aircraft.

The threat to the UK defence industry is further compounded by media reports that Boeing is in line to receive the order for 50 much-needed Apache helicopters, rather than Yeovil-based Agusta Westland, with the potential loss of 600 West Country jobs.

Unite said that Michael Fallon has major questions to answer about the massive tilt in procurement policy, which analysts say, could amount to £2.5bn of the annual Ministry of Defence equipment budget of £8bn being spent with US companies, with minimal UK content, by 2020.

“As a first step, the government needs to ensure that a substantial amount of P-8A production work is undertaken in the UK, with all the support work to maintain these aircraft in the years ahead. Apparently, the P-8A will not be using UK weapons, which is a disgrace.

“The UK defence and aerospace sector is critical to maintaining thousands of skilled jobs in the UK and the economic prosperity of the communities where the factories are based.

“This proud tradition of manufacturing is critical in any renaissance of overall UK manufacturing in the decade ahead. It can’t just be squandered by the easy option of buying ‘off the shelf’ from America.

“The decision to scrap the new generation Nimrod aircraft as part of the SDSR has been shown to be rash and short-sighted.

“Michael Fallon needs to make a statement to MPs before any contracts are signed and before Parliament rises for the summer recess on 21 July on what is happening specifically with the replacement for Nimrod and also regarding the Apache helicopters’ order.

“More generally, the defence secretary has to outline a strategy that will maintain defence manufacturing in the UK, safeguarding British expertise and jobs, as well as the maintenance contracts that go hand-in-hand with such complex pieces of technology.

“Chancellor George Osborne’s ‘march of the makers’ should not begin at Boeing’s headquarters* in Seattle, but with well-respected British defence firms with deep roots across the UK.”