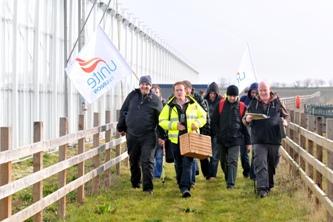 Unite has warned the Kent based agricultural producer Thanet Earth and its supermarket buyers – Tesco, M&S, Sainsbury’s and Asda – that it will escalate its campaign to end the alleged exploitation of workers unless the producer engages with the union over employment conditions at the biggest green house complex in the country.

Unite has already held protests outside Tesco and M&S and demonstrations in London, and the union will escalate the campaign and throw its full weight behind the workers’ drive for justice unless the stakeholders work with the union to deliver their ethical responsibilities.

In the run up to Thanet Earth’s harvesting operation in 2009, the company promised 500 jobs for local people in one of the most depressed regions of the UK. Almost two years on, the vast majority of the workforce still have no permanent contract, no job security and work through four different agencies in a system of permanent casualisation.

In 2010 Thanet Earth introduced a second agency – HRGO – into the pack house, creating more competition and insecurity for workers and resulting in the scrapping of the weekly rota system and forcing workers to telephone their agency on a daily basis for work.

Unite has submitted evidence to the Ethical Trading Initiative and Gangmasters Licensing Authority about these conditions. The submission to the GLA includes serious allegations raised by the workforce including: agency employees in positions of authority taking cash and gifts for work; systematic denial of paid holidays and holiday pay; discrimination against workers taking holidays who are then denied work; and years of employment on a casualised basis, without fixed contracts.

Sharon Graham, Unite’s director of organising, said: “Thanet Earth and its supermarket buyers need to engage with Unite over the alleged abuses of workers. Thanet Earth claims to be an ethical employer, but the workers are telling a very different story. The supermarkets claim to take seriously their ethical responsibilities, but we can see no evidence of that. Unite will not stand by and allow any worker to be abused and we call upon the supermarkets to ensure their warm words on ethical policies actually mean something.”

The union is intending to raise the plight of Thanet workers through the formal process for breaches of the Ethical Trading Initiative which all four supermarkets are signed up to.

The agencies employed at Thanet Earth are Kent Staff, HRGO, Worldwide Recruitment and Red Eagle. Most of the major supermarkets in the UK are signatories to the Ethical Trading Initiative base-code which states regular employment must be provided and free association and union organisation facilitated.