Shock findings confirm a culture of bullying is rife at British Airways – one in two workers report being bullied and victimised.

The confidential survey of nearly 2,000 BA employees reveals that nearly three in every four members of BA staff have witnessed or been subject to bullying at one of Britain’s best known companies.  The bulk of the respondents to the survey were BA cabin crew members, reflecting, Unite says, that workforce’s fears that they have been deliberately targeted by BA’s management, which is seeking to “break” them and Unite in order to drive down terms and conditions.

Unite warns that the survey reveals such an “everyday and shocking level” of bullying that this can only harm the business. Unite also believes that the extent to which a bullying culture has taken root is a direct result of the war BA’s management has been waging against it cabin crew since 2009.

In recent months, about 70 cabin crew have been suspended and 18 sacked (with only three subsequently reinstated) as BA continues to quash resistance to employment changes directly affecting cabin crew.

Unite is calling for an immediate meeting with the airline to find ways to address the findings.

The results are published as Unite is half way through a ballot of some 10,000 cabin crew members over the issues of union busting and the introduction of a cadre of crew on poorer terms without agreement with the workforce.

Key findings of the survey reveal that:

• Intimidation, unfair criticism and humiliation were cited as the top three forms of bullying

• But over six out of ten people (64.7%) did not report the bullying with many saying they saw no point due to the company’s and/or management’s approach

• 37.4% of respondents did report the bullying, but of those two thirds said no action was then taken by the company

Comments from those completing the survey include: 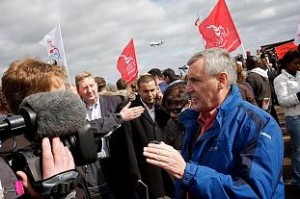 Unite’s general secretary Tony Woodley said: “This survey shows that the company’s macho management has pitched colleagues against one another. BA management’s urgently needs to do a corporate u-turn and sit down with Unite representatives to address this bullying epidemic. That begins with lifting the sanctions imposed on over 6000 cabin crew who took action last year and immediate agreement that a third party will analyse those cases where workers have been disciplined or dismissed, often on the flimsiest of pretexts.

“The message of this survey has to be, Mr Walsh and the BA board – your war on your workforce is ruining this once great airline.   You have the power to end this misery and restore this airline to the place of public affection it once deserved.  For your customers, shareholders and workforce, the glaring question now is why you choose not to.”

Central to the dispute are the key issues of union-busting at the airline and the imposition without negotiation of a new workforce tier on poorer terms and conditions. 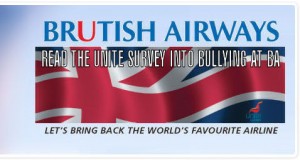 The survey was carried out in November when Unite contacted its members at BA to invite them to complete a confidential questionnaire. 1905 employees responded to the survey. A full copy of the survey is available at www.unitetheunion.org

BA Dispute – a view from the shop floor