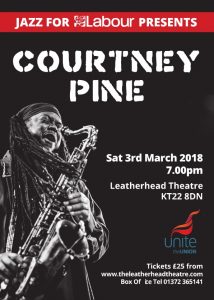 Unite South East Region is sponsoring a unique ‘Jazz For Labour’ event on 3rd March when legendary jazz musician Courtney Pine will be playing in concert in the Leatherhead Theatre.

Pine will be playing a full set encompassing the 30 years he has towered over the UK jazz scene incorporating a wide range of his rich and deep repertoire.

The Voice newspaper stated: “There have been many pioneers in the black British community – people who have defined an era, changed societal perceptions and made it easier for those who follow to progress in their field.  Courtney Pine is such a trailblazer”

He has released 16 studio albums and continues to tour worldwide with his award winning band playing clubs, concert halls and festivals from Glastonbury to Fuji Rock, Montreux to Cape Town.

His numerous TV and radio presenting credits include “Mandela Living Legend” for the BBC and the Sony Award winning long running specialist jazz show – Courtney Pine’s Jazz Crusade for BBC Radio 2. He was most recently commissioned by The Tate to compose and perform a unique piece inspired by the work of artist Henri Matisse, as part of Tate’s ‘Matisse Live’ broadcast in cinemas across the UK.

In 1986 a 22 year old Courtney Pine appeared on the front cover of the iconic British music publication NME, he is the only Black British jazz artist to do so – the last quote in a two page interview read “You know I’m doing this for a reason” – some 30 years later he still is…

There will also be an appearance by a a ‘major’  Labour front bencher at a meet and greet drinks reception and a silent auction with some fabulous prizes.

This is an unmissable event; tickets are only £25.00 and are available either by calling the Box Office on 01372 365141 or by clicking the link here: The Leatherhead Theatre.