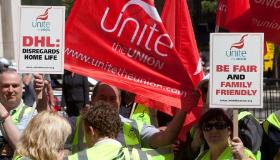 Sainsbury’s has been accused of double standards over its ‘Feed Your Family’ campaign in a row over workers’ rights. Over 100 DHL staff (Unite members) staged a protest outside Sainsbury’s London HQ today over changes to shift patterns and new working practices.

Sainsbury’s has an exclusive contract with DHL for its warehouse and delivery services. But DHL has imposed new working times that mean out of 12 five-day shifts, many workers will only get three weekends off.

Unite said that change would destroy family life for those affected and has urging Sainsbury’s to protect DHL workers from an unprecedented attack on their family lives.

“Sainsbury’s high-profile Feed Your Family campaign encourages its customers to eat as a family,” said Unite national officer Paul Davies. “But when we urged the supermarket to intervene to protect warehouse workers at its depot from this devastating attack on their family lives, we were ignored.”