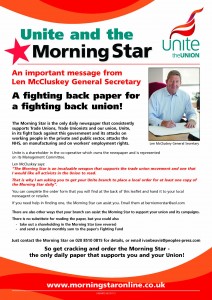 A new initiative by Unite in conjunction with the Morning Star was launched recently – and it’s already beginning to bear fruit.

In a campaign spearheaded by general secretary Len McCluskey, Unite has written to its branches across Britain explaining why they should take out a regular order for our newspaper and how they can help the paper survive in the current difficult climate – by taking out shares and supporting the fighting fund.

It is one of a number of new initiatives Unite is implementing to help the paper.

In a leaflet sent to all of its union branches Len McCluskey says: “The Morning Star is an invaluable weapon that supports the trade union movement and one that I would like all activists in the union to read. That is why I am asking you to get your Unite branch to place a local order for at least one copy of the Morning Star daily.

“There is no substitute for reading the paper but you could also take out a shareholding in the Morning Star and send a regular monthly sum to the paper’s Fighting Fund.”

And that is exactly what branches are starting to do, with requests for shares coming in from branches from Scotland, the north west, south east and the south-west.

The leaflet also contains a printed form to hand to retailers to order a daily copy and an application for shares in the PPPS.

We are hoping that over the next few months, as Unite branches get into their cycle of meetings for 2013, we will pick up more daily readers, shareholders and regular fighting fund donations.

If this campaign is a success, the paper’s management committee will consider extending the initiative to other unions who are supporters.

As Len McCluskey says: “Get cracking and order the Morning Star – the only daily paper that supports you and your union!”