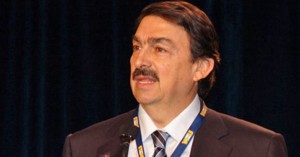 Napoleon Gomez, the leader of the Mexican mining and metals union Los Mineros has at last been taken of Interpol’s ‘Red List’ which could have seen him arrested should he travel outside of Canada where he is in exile, supported by the United Steelworkers Union.

The Interpol red list requests provisional arrest of wanted persons, with a view to extradition. An Interpol Red Notice is the closest instrument to an international arrest warrant in use today. Interpol does not have the authority to issue arrest warrants in the formal sense, as this is the domain of the sovereign member states.

Following Napoleon’s strong condemnation in 2006 of the deaths of miners which he described as ‘industrial homicide’ at the mine in Pasta de Conchos in Mexico he has been persecuted by an alliance of anti union employers and the Mexican government and forced to lead Los Minero’s from exile in Vancouver, Canada. Los Mineros is the most powerful union in Mexico and is a main target for union busting in the country. The union is allied to the United Steelworkers in the USA and Canada and Unite in the UK.

There has been a lengthy and bureaucratic internal investigation by Interpol which has included numerous stages of examination of the case lodged against Napoleon by the previous right-wing PAN party government of Mexico.

In a parallel case, as has been reported, the Magistrates of the First Collegiate Tribunal for Criminal Matters of the First Circuit, Juan José Olvera Lopez, Luis Perez de la Fuente and Jose Luis Villa Jimenez, unanimously resolved to grant the injunction ordering Interpol Mexico to cancel the red notice which had been issued.

The decision by the international Interpol authority overrules Mexico’s Interpol branch and vindicates the long standing claim that the previous two governments of Vicente Fox and Felipe Calderon abused their power over the Mexican Interpol branch to run a ‘sham’ case against Napoleon Gomez in order to discredit him and keep him living in illegal exile.

Napoleon stated: “It’s terrible that international Interpol has found it necessary to make it clear that these Mexican authorities abused the international instrument of the red notice for political ends and unethical business interests.”

A new book authored by Napoleon Gomez called ‘Collapse of Dignity’ will be launched this week internationally on 17th April.

‘Collapse Of Dignity’ is Napoleon’s powerful account of the union’s fight, mounted in the face of traitors, armed aggression, death threats, and a political alliance going all the way up to the level of the president of Mexico.

Gomez’s story is one of outrage, but also of hope. Through Collapse of Dignity lays bare sickening injustice and inexcusable aggression against the Mexican working class, it is at its core a fervent call for a global workers’ movement that will represent the fundamental rights of every person who works for a living.

Visit the Collapse of Dignity website and order your copy online.