Union busting at Honeywell ‘continues’ after settlement of dispute 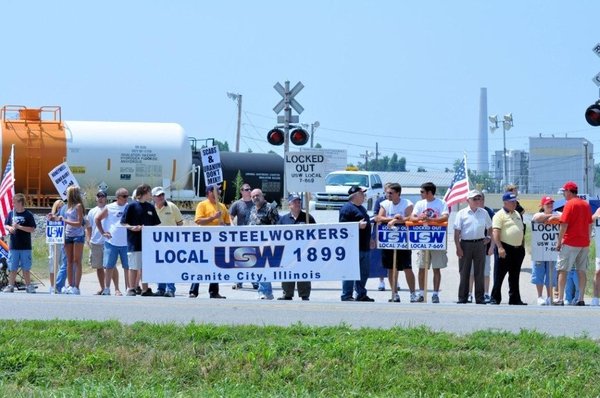 After a 14 month lock out at the Honeywell International Metropolis, Ilinois, uranium enrichment plant, members of the United Steelworkers agreed to a three-year contract, ending lock-out. But it has taken more than two months for all the workers to return to full-time employment as federal law says all the previously locked-out workers needed to go through recertification trainings and qualification tests in order to return to the uranium plant.

Yet, Steelworkers reps say Honeywell is still attempting attack the union’s USW 7-699 local may not be over. Two union activists were sacked recently without just cause.

Local 7-699 spokesman John Paul Smith said that the workers were fired for actions that ‘occurred during the lockout’. The two workers were activists who served on lockout committees and were some of the most vocal opponents of the company.

“Our workers agreed to Honeywell terms and conditions in the contract, as well as a re-entry plan with the company and a commitment of professionalism during and after the transition,” said Kevin Smith, USW staff representative. “The latest terminations are yet another example of Honeywell’s unwillingness to do the same.”

Beyond the recent firings, several workers said the climate within the plant was tense. As a condition of the lockout settlement, Honeywell was allowed to hire scab replacement workers as contractors working inside the Honeywell uranium plant. Locked-out workers are now forced to work side by side with scabs.

While workers in the production department have reported positive relations with supervisors at the plant, there has been several reports of intimidation and harassment by some managers.