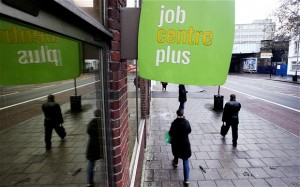 The Institute For Public Policy Research (IPPR) is predicting that unemployment will rocket by 100,000 before the end of the summer 2012.

The IPPR says it could be 18 months before the UK jobless total falls.

The North-west and Eastern England, London, and Yorkshire and Humberside will be the hardest hit – but it says the West Midlands, Northern Ireland and South West will see some job recovery.

The IPPR said it expected 50,000 more men and 50,000 women to become unemployed this year as public sector jobs continued to be slashed with no sign of the job creation the ConDem government predicted would take place in manufacturing and the private sector.

“The personal tragedy of the slow economic recovery is the way unemployment will continue to rise over the next year, even once the economy begins to grow. This has been the longest recession and the slowest recovery that Britain has ever experienced. The risk is that high unemployment becomes a permanent feature of the UK economy, as it did in the 1980s,” said Kayte Lawton, senior research fellow at IPPR.

Kate Lawton went on to say the Government’s new £1 billion Youth Contract, which pledges wage subsidies for more than 100,000 young people and came into force this month, was a “good first step” – but tellingly warned people who have been out of work for a year or longer “face being scarred by the experience and without help, may never work again”.

The over-50s accounted for the biggest rise in unemployment between November and January, up by 4.8% to reach 428,000, with almost half of those out of work for a year or more, the latest figures from the Office for National Statistics show.

Young workers are also bearing the brunt of the slow labour market, with 1.04 million under-25s out of work.

The Department of Work and Pensions limply responded to the report by stating  “The international economic outlook remains difficult. We will do everything we can to help the unemployed find jobs. There have been some encouraging signs that the labour market is stabilising, but there is clearly still a big challenge ahead to bring down unemployment,” a spokesman said.

So it really is ‘back to the 1980’s’! Enterprise zones, re-heated youth employment schemes, attacks on basic employment rights that failed three decades will not address the problems we will face with lost generations of young unemployed and people looking at years on the dole.

The most recent data from the from the Office for National Statistics (ONS), showed that UK unemployment rose by 28,000 to 2.67 million during the three months to January, with the unemployment rate at 8.4%.

The number of people claiming Jobseeker’s Allowance increased by 7,200 to 1.61 million in February.