UK industry leaders have ‘snouts in the trough’ – TUC 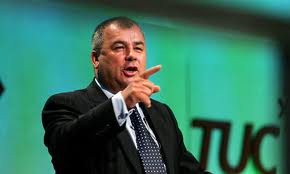 Brendan Barber - UK bosses have "snouts in the trough"

Bosses getting huge pay rises while workers have their wages squeezed is a recipe for “desperately low morale” in companies, TUC General Secretary Brendan Barber has warned.

Brendan Barber said industry leaders had their “snouts deep in the trough” even at a time when firms are struggling.

Latest research from Incomes Data Services showed that the total earnings of FTSE-100 directors increased by 55% last year while average workforce pay settlements were only between 2% and 3%. RPI inflation is running at 4.7%.

Brendan Barber said shareholders should take their responsibilities more seriously and veto big boardroom rises, and suggested workers should sit on company remuneration committees to “inject a dose of reality” to awards.

He told the BBC Radio 4 Today programme: “Even at a time when companies have been going through some pretty serious difficulties and we have not seen significant improvements in share prices, even in those circumstances top corporate leaders have still had their snouts deep in the trough.

“What we have seen over quite a long period is levels of increases being secured by top corporate leaders that are simply not justified in any way by performance and are out of all proportion to what’s been happening to the rest of the workforce, and that’s a recipe for desperately low morale.”

“Shareholders should take their responsibilities very much more seriously than at the moment they appear to. They do have a vote on company decisions on top remuneration. They exercise that vote too rarely to show their displeasure.”

This entry was posted in Politics, Trade Unions. Bookmark the permalink.