UK banks to be sued over sub-prime mortgage deals 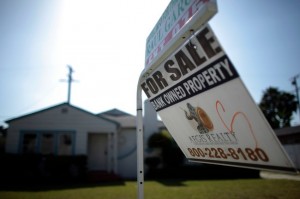 In what promises to be a brutal and long drawn out battle between the US government and the world’s most powerful banks, US federal regulators have finally decided to sue seventeen banks and financial companies (including Uk banks) which sold sub-prime mortgages which were at the heart of the economic crash three years ago.

The banks are accused of selling the  US state backed mortgage giants Fannie Mae and Freddie Mac nearly $200 billion in mortgage-backed securities which were toxic.

The legal actions the seventeen banks of ‘misdeeds’ during the sub-prime housing boom. The US financial industry says that the litigation could last for years and undermine earnings and balance sheets in the process after the complaints were filed as the stock market closed on  Friday afternoon.

The move had leaked out  but with word during trading leading to shares of Bank of America fell more than 8.3%, while JPMorgan Chase dropped 4.6% and Goldman Sachs fell 4.5%.

The legal action represents a long needed effort by the US federal government to go after the greedy and under regulated financial services industry. President Obama and the Federal Reserve have long been criticised for ‘going soft’ on the banks, which benefited from a $700 billion bailouts following the collapse of Lehman Brothers in late 2008.

The rescue of the state backed mortgage giants Fannie Mae and Freddie Mac has already cost US taxpayers $153 billion, and the federal government estimates the effort could cost $363 billion through the next two years.

The legal actions could cost the banks dearly. For instance, the action against the Bank of America, claims that Fannie Mae and Freddie Mac bought more than $57 billion worth of toxic mortgage securities from the bank and two companies it subsequently acquired, Merrill Lynch and Countrywide Financial.

Here is a list of those banks and financial institutions facing legal action and the amount in securities the institutions are said to have sold to the government mortgage buyers:

Meanwhile in the UK an investigation is being conducted looking at similar allegations. The Serious Fraud Office says it does not discuss details but says that they have “been interested in asset-backed securities for some time. People in the City have talked to us about their concerns. We are now looking at litigation and taking action. We are also looking for whistleblowers.”

The SFO is looking at the possibility of criminal and civil action and team is examining at least seven major asset-backed security transactions that were either put together or handled by London banks.