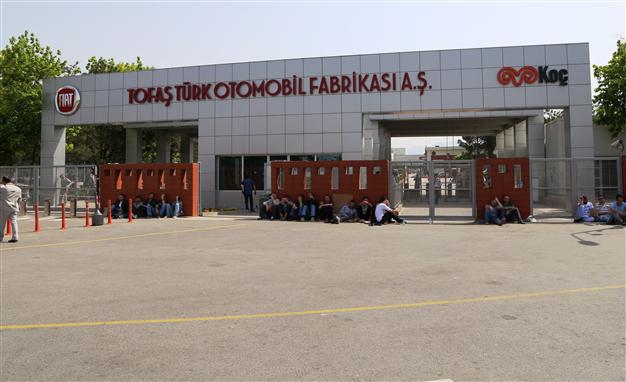 A wave of stoppages across the Turkish car industry is taking place as workers demand better pay and conditions – as well as demanding to join a union of their choice and elect their own union reps.

Over 7,000 workers are taking part in strikes and demonstrations against poor working conditions and are abandoning the ‘yellow’ trade union known as the Metal Workers Trade Union of Turkey (Türk Metal) a union many workers were forced to join and be registered with. Türk Metal is seen as a stooge union.

The protest started last week at Turkey’s largest car factory, a plant in the northwestern city of Bursa run by Oyak Renault. The factory is a joint venture between France’s Renault and the Turkish army pension fund.

On Friday last the stoppages had spread to the neighboring Tofaş plant. Tofaş, owned by Italy’s Fiat and local conglomerate Koç Holding, said it had halted production until the dispute was resolved.

Workers are outraged by failures of the Türk Metal union to negotiate decent pay rises and represent workers properly.

In response to major strikes at the Renault and Tofaş plants, workers at the Mako, Coşkunöz and Delphi auto factories followed suit and the Ford Otosan plant was stopped. Ford said this was the temporary stoppage due to a lack of parts caused by the strikes at other firms.

Each day that workers are absent from their factories means a decline in the number of cars produced. Renault was expected to suffer a decline of 5,220 units on the sixth day of the strike, while the loss in production estimated for the Tofaş plant was 3,248.

Together the two automakers, Tofaş and Renault, account for more than 40 percent of Turkey’s annual car output, according to industry data.