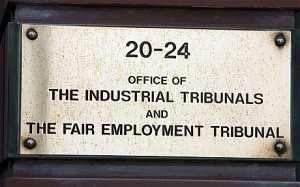 Employers want a return to the Thatcher era

An ideological attack on the right of workers to bring a case to an Employment Tribunal is being pressed by employers. This is an attack on employment rights that will take us back to the early Thatcher era.

The Con-Dem government is preparing to launch a “major review” of employment tribunals and the TUC is warning that any major changes to the system could stop workers who have been sacked, victimised or discriminated against at work from seeking justice; giving the go-ahead to employers to dismiss workers on a whim and charge a fee or deposit to workers wanting to bring a Tribunal case against their employer.

Employers bodies including the CBI and British Chambers Of Commerce have been lobbying ministers to make changes to the tribunal system which will bring about a return to the Thatcher era a of “hire and fire” at will. They argue that the “system is broken” and “pro-employee”!

The TUC has said “that rather than complaining about the cost of cases and supposedly vexatious claims, employers should be working harder at treating their staff well, improving their employment practices, and ensuring they stay within the law”.

Employers groups are calling for an increase in the qualifying period in which workers can claim unfair dismissal from one to two years (one of the early Thatcher “reforms” in the 1980s), which would prevent thousands of wronged employees from challenging their employers, and allow companies to sack staff at whim.

The TUC says making people pay a fee of anywhere between £30 and £500 before they can go to a tribunal would deter many employees’ especially low paid individuals who have just lost their jobs and no longer have a wage coming in.

TUC General Secretary Brendan Barber said: “At the heart of any change to the tribunal system has to be the desire to make it more effective at delivering justice to the thousands of people who every year are wronged at work. While employer groups complain that tribunals are costing them too much, they seem to have lost sight of the fact that if firms treated their staff as they are meant to, few would ever find themselves taken to court. The government should stand firm in the face of the intense employer lobbying seen in recent weeks and leave employment tribunals to continue holding rogue employers to account and delivering justice for all workers who have been discriminated against or treated unfairly.’

The TUC argues that a number of the claims being put forward by bosses groups are misleading:

Unite’s Len McCluskey said: “Attacking access to workplace justice would see this country hurtle back to the dark days of Mrs Thatcher when an employer could say ‘get your coat, you’re fired‘ without any need to explain to a worker why they have lost their job” For full Unite statement click here.

“Evidence on the effects of employment protection legislation is equivocal but on balance suggests that while less protection encourages increased hiring during economic recoveries it also results in increased firing during downturns. The overall effect is thus simply to make employment less stable over the economic cycle. It is arguable that had a policy akin to the ‘employers’ charter’ been in place during the recent recession there would have been more redundancies in a manner akin to what occurred in the 1990s recession. Such an outcome would have been detrimental to fostering a culture of genuine engagement and trust between employers and their staff, and potentially harmful to the long-run performance of UK plc.”