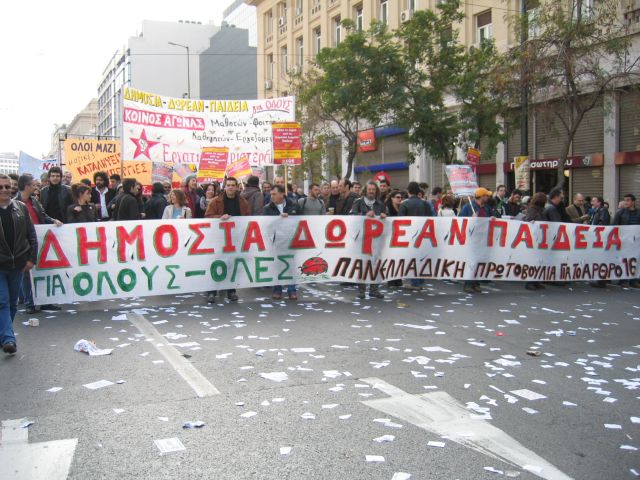 By Ronald Jannsen
Economic adviser working in the trade union movement in Brussels.

These are dark times for trade unions and workers. They face a strong and European wide political consensus claiming that Member States should exit the crisis by cutting wages and weakening collective bargaining systems. The old and ancient instrument of a devaluation of the national currency is to be replaced with wage devaluations.

In Portugal, Spain and Greece, this consensus is already in place. Employers there now have several possibilities to lower wages. They can easily get out from higher level collective agreements and renegotiate lower wage standards at company level. It is even possible for management to completely circumvent representative trade unions and strikes or impose deals with ‘committees of workers’ or individual workers instead.

In France, Belgium and Italy, wage formation systems are, for the moment, still standing but proposals to make them flexible are just around the corner or already on the discussion table.

Unfortunately, the European level is adding insult to injury. On top of the competitive race towards wage flexibility that is already taking place, the European Council and Commission are now setting up a system of economic governance that actually forces Member States to enter this race or else risk being financially sanctioned by the Commission.

The conclusions from the last European Council continue on this road. Besides a welcome but extremely vague reference to the social dimension of monetary union, the time-bound roadmap that is to be presented to the June 2013 Council again insists on the idea that Member States should enter into contractual arrangements on competitiveness and growth with European institutions.  The Council conclusions stop there but the latest report from the President of the Council (written in cooperation with the Presidents of the Commission, the ECB and the Euro group) on a ‘genuine monetary and economic union’ provides much more detail.

The basic idea is to strengthen European economic governance even further. The in-depth country reviews, now undertaken by DG ECFIN for specific countries identified as potentially in danger of experiencing macroeconomic imbalance, would be generalized to all euro area countries. The country specific recommendations, established by the Commission in the framework of the EU 2020 strategy, would form the basis for drawing up the specific and detailed (note the precise wording here!) measures in these contractual reform arrangements. The final objective of all of this is to address and do away with existing and bothersome ‘rigidities’ that would otherwise be difficult to deal with at the level of a national democracy.

Wages and collective bargaining systems are perceived as one such ‘rigidity’. This is perfectly clear from the 2012 country specific recommendations, where the Commission singled out 16 Member States. The 16 were called upon to: reform their wage indexation systems, weaken sector bargaining systems and decentralize bargaining to the company level, limit the increase in minimum wages and increase wage flexibility at the lower end of the pay scale.  If such recommendations were to become part of an enforceable contract between the Commission and Member States, then social Europe will definitely be gone.

Trade unions can strike back
At the same time, there’s something strange with the Council Conclusions. Until quite recently, the European elite intended to go for a new international Treaty or a change of the European Treaty itself. In this way, interventions in wages would then be backed at the highest legal level.

This is no longer the case. The December Council suddenly changed track and decided that these contractual reform arrangements would be drawn up by the Commission using secondary legislation. Here, two things are of major interest for trade unions and their strategy to defend bargaining systems.

First, the rumor we hear inside the corridors of DG ECFIN is that the European financial elite would have preferred to go for a change in the Treaty itself. In this way, all doubts as to whether European interventions in national wage systems are indeed legal would have been erased. However, European decision makers refrained from doing so because a Treaty change implies national consultations and, in some cases, popular referendums. The elite were unsure whether national democracies would be willing to transfer the competence on something as crucial as wage formation to a technocratic Commission. They feared the popular backlash against the creation of a European superpower that would be perceived as operating in the interests of business and would have formal competence to overrule national decision makers and national social partners.

Second, the former also confirms the trade union analysis that the system of European economic governance, especially when wages are concerned, is built on shaky legal grounds. The Commission’s Legal Services may claim that the Treaty articles on the broad economic guidelines provide a basis for the Commission and the Council to enter the realm of wages. However, the power to recommend is not the same as the power to impose a policy and, as far as sanctions are concerned, the ultimate sanction foreseen in the Treaty for not respecting the broad economic policy guidelines is for the Commission to go public with the fact that a Member State has failed to follow its advice. European economic governance, with its financial sanctions and its reversed quality majority voting, is not in line with the European Treaty.

European trade unions can base a strategy on this. When the Commission designs new economic regulations such as the contractual reform arrangements mentioned above, trade unions need to make sure that the regulation contains a ‘wage safeguard clause’ and that the legal basis of these regulations refers to those Treaty articles which protect wages and social dialogue.

When entering into a dialogue on wages with the European institutions, whether this is the European Social Dialogue, the Macro Economic Dialogue or the new Wage Monitoring Group recently proposed in the Commission’s Employment Package, trade unions should systematically refer to the limits of constitutionality, with the aim of strengthening their position and case inside this institutional dialogue.

Finally, the lack of a convincing legal basis in the Treaty can be linked with other legal instruments. Pushing Member States into cutting minimum wages and downgrading bargaining institutions does not only exceed the limits of the Union’s competence, it is also in deep conflict with ILO conventions and the Council of Europe’s Charter of Fundamental Rights. The institutional possibilities to develop a broad and all encompassing legal strategy against negative European interventions in wages should be grasped.

The European Treaty protects the autonomy of social dialogue and forces the European Union to respect national systems of industrial relations. This, together with the strength of trade unions coming from members who vote in elections, offers an opportunity for trade unions to stand up to the Commission dictates against wages and re-conquer the cause of European integration from the zealots of downwards wage competition.