Three Speeds In Europe, All Slower 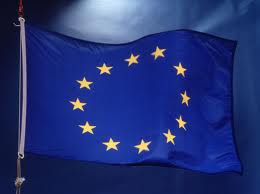 The latest publication of the GDP data for the EU shows three distinct trends but one unifying theme – slower growth.

In an important but dwindling group are those economies which are still expanding, led by Germany where GDP grew by 0.5% in the first quarter of 2012. In a larger group are those countries where the economy is stagnant. This now includes France which recorded zero growth in the quarter. The largest numerical group are those countries in recession, which includes Britain, Italy, Spain, Ireland, Portugal and Greece. The net result was that both the Euro Area group of 17 countries and the EU group of 26 recorded zero growth in the quarter.

If the focus shifts to the 12-month growth rates, comparing the first quarter of 2012 to the same quarter in 2011, the picture is even more stark. Outside of the Baltic States, which are still recovering from a 1930s-style Depression with the aid of substantial EU investment , only two countries recorded growth above 1.0%. These were Finland at 2.9% and Germany at 1.2%. The fact that the German motor of the EU economy is sputtering close to 1% growth is cause for alarm. It suggests that the entire EU economy is decelerating, and that the risk of renewed recession is increasing.

Even for the group of countries where growth has been strongest, growth is clearly slowing. The deceleration of the German economy is important for the entire European economy. These trends are shown in Figure 1.

But there are a growing number of countries that have headed back into recession, including Britain, Spain and the Netherlands – Figure 2. France has grown by just 0.1% in the last 6 months and maybe headed in the same direction. There is little to suggest that growth can accelerate with current policies. 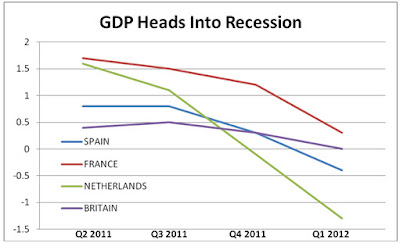 The Euro Area has contracted by 0.3% in the last 6 months as has the EU as a whole. The crisis countries continue to contract sharply, led by Greece – Figure 3. However, the much greater weight of the Italian economy, seven times larger than the Greek economy, means that its clear slump is even more significant for the European crisis. 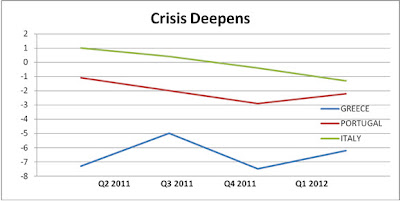 Formerly stronger economies are experiencing a slowdown in growth. Crucially this includes Germany. Other countries, such as Britain where growth had been stagnant have gone back into recession. This is also true for Spain and the Netherlands. France may be headed in the same direction. Significant falls in output are still occurring in the crisis-hit countries. These may now appear to be joined by Italy, where the crisis is deepening.

First published by the Socialist Economic Bulletin on 16th May 2012 and re-published with permission of the author.