The US has turned a corner in unemployment; can we follow them? 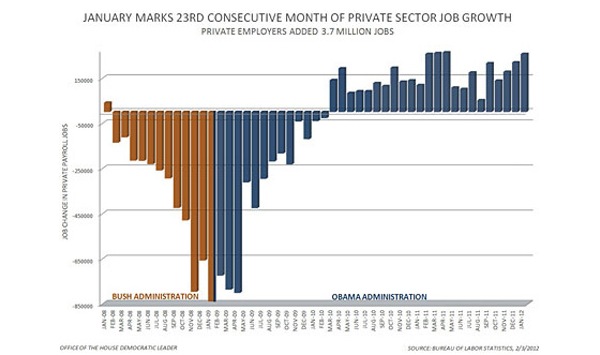 Figures posted in the USA last week show the US economy is moving forward, with a growth in private sector employment – up by 257,000 – and unemployment declining by 0.8 per cent since August last year – the lowest point since February 2009. The number of jobless workers dropped to 12.8 million, down from December’s 13.1 million.

However, the number of long-term unemployed (those jobless for 27 weeks or more) was little changed at 5.5 million, about 42.9 percent of the unemployed.

The figures were seized upon by AFL-CIO president Rich Trumka who said: “The seeds of sustainable job growth are clearly present – if Republicans in Congress do not succeed in weakening the recovery.”

The figures (see chart above) can be seen in stark contrast to the UK where swingeing austerity is causing the economy to flat line – and looking like it could go into reverse. In the USA the figures are being seen as a vindication of Obama’s agenda for job creation and avoidance of swingeing austerity measures.

Nonetheless a number of US economists have warned that the jury was still out and the USA’s “day of reckoning’ may still come – but, Economic Policy Institute economist Heidi Shierholz said the figures show: “A labour market where all the moving parts seemed to be moving in a solidly good direction.”

Manufacturing saw an increase of 50,000 jobs, mostly in durable goods, construction added 21,000 jobs. There were 10,000 new jobs in the mining industry, professional and business services put on 70,000 jobs, leisure and hospitality industry added 44,000 jobs and health care jobs grew by 31,000.

One sector the USA uses as a barometer is the car industry.

Three years ago, the US car industry was in real trouble. Chrysler faced the possibility of running out of money and General Motors were on the ropes. Both received government help and took ‘road trips through bankruptcy.’ Chrysler merged with Italy’s Fiat. The impact has been significant. Chrysler added a third shift and 1800 jobs at its Rockford, Illinois site last year.

In another key development, according to the Wall Street Journal, Fiat is now said to be reconsidering its development plans in Europe and considering shifting some production to the USA.

Trading profit, which Fiat regards as its key performance indicator, more than doubled to €765 million ($1 billion) in its fourth quarter while revenue rose almost as steeply, to €19.6 billion from €9.45 billion, both largely due to Chrysler.

The head of United Autoworkers, Bob King, whose union has accepted long term agreements focused on job security rather than big pay deals, praised Obama’s commitment to the US automobile industry. “The president has demonstrated his commitment to creating an economy ‘built to last’ by restructuring the US auto industry for the 21st century, while Republican opponents were willing to let it die and see millions of jobs lost.”

This last point refers to comments by Republican candidates such as front-runner Mitt Romney who had argued that carmakers should have gone straight into bankruptcy, without receiving government support.

As Obama, visiting the recent Washington Car Show, said: “It’s good to remember that the fact that there were some folks who were willing to let this industry die.”

This blog was first published on Left Foot Forward on February 6th.