The MG Rover Phoenix Four must cough up

It’s almost a decade Since MG Rover went bust, and it’s time for the ‘Phoenix Four’ (plus one) group of directors to finally cough up.

The group has finally run out of excuses, and they are about to pocket another million quid each from the wreckage of the car crash that they presided over at MG Rover. They should hand it over to the ex-workers.

John Towers, Nick Stephenson, Peter Beale and John Edwards are in line for another payday as a result of the liquidation of MGR Capital, the car finance joint venture which was set up with HBOS.

The liquidator, Paul Stanley of Begbies Traynor, had banked more than £23 million from MGR Capital after MG Rover collapsed in 2005, but the cash had been trapped in legal limbo-land while the Pensions Regulator prepared a claim on part of the money.

A deal has been struck at last. Mr Stanley stated last week that £8 million had been paid to the pension scheme for former MG Rover management.

The remaining money, around £12 million, will be divided between the shareholders.

Mr Stanley couldn’t do anything else other than hand the money over, stating: “I do not have any options in law, all I can do in law is pay these people on the share register…I do not get a view on it, I do not get a moral standing on it. I have an obligation in law to pay out, no-one has discretion over this.”

That means more than a million pounds each for the Phoenix Four, plus MG Rover former chief executive Kevin Howe, thanks to their 49.9 per stake in MGR Capital, apparently held via a trust owned by Beale and Edwards. Nice work if you can get it.

News on this latest bonanza rubs salt in the wounds of 6,500 of ex-MG Rover workers who lost their jobs at Longbridge factory without any redundancy payment when the company went bust owing £1.4 billion. Our work tracking the ex-workers found what a struggle many of them and their families went through. While many of the ex-MG Rover workers did get back into work eventually, many were on much more precarious terms and with substantial cuts in incomes.

When the 2008-9 recession hit, many lost their jobs again. Many of the ex-workers have been in and out of employment repeatedly in the near decade since MG Rover went bust.

Contrast that with the pay-out bonanza enjoyed by the Phoenix Four-plus-one between 2000 and 2005. Remember that the Phoenix Four bought MG Rover for just a tenner from BMW back in 2000, with MG Rover coming with a £500 million dowry from the German car-maker.

The Four then set up a highly complex financial structure to move money around and extract value – to the tune of £42 million in salaries and pensions before the loss-making firm collapsed five years later.

A 2009 Department of Business report concluded that the five directors running carmaker MG Rover awarded themselves “unreasonably large” payouts, despite the fact that the risks they took were “relatively unsubstantial”.

Indeed, that 2009 BIS report noted that they “chose to give themselves rewards out of all proportion to the incomes which they had previously commanded, which were also large when compared with remuneration paid in other companies and which were not obviously demanded by their qualifications and experience”.

Meanwhile, the distribution of assets and liabilities in the complex group meant that assets could be allocated to non-MG Rover companies in the group, while MG Rover was made to bear liabilities that should have been borne by Phoenix. 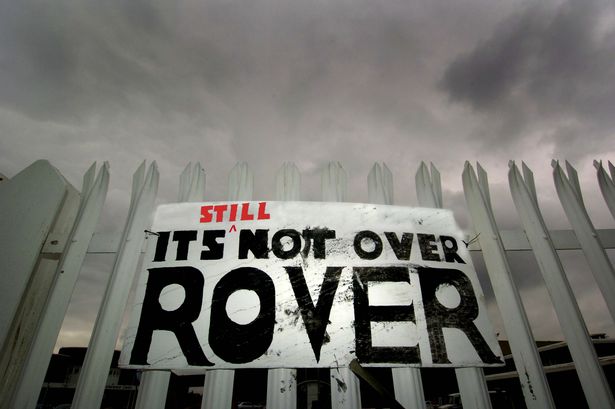 In addition, tax losses to which MG Rover was entitled were transferred to Phoenix.

The Four didn’t face any criminal charges as the complex financial structure they set up to extract value was cleverly designed and within the rules, but they were disqualified from being directors of any company for up to six years. After the latest pay out to the Phoenix Four, former MG Rover Trust Fund trustee Carl Chinn stated last week: “I am outraged and disgusted.

“If they had any honour, they would hand their money over to the workers who have lost so much. The workers gave everything to MG Rover and have been treated shabbily.”

Labour MP Richard Burdon, whose Birmingham Northfield constituency includes Longbridge, also said last week that the Phoenix Four should hand the money over to workers, stating that “they have a moral responsibility to pay up.”

They both have a strong point. When MG Rover collapsed the Pheonix Four pledged to set up a trust fund for the 6,500 former staff. When that pledge was first made, the Four did not attach any conditions to paying staff with the trust fund money. But so far the Phoenix Four have failed to cough up any money at all.

While there may be technical reasons as to why the Phoenix Four plus One couldn’t hand over funds for several years, you’d have thought that they could anyway dip into their own deep pockets. After all, they did manage to stash away £42 million during their five years at the helm.

And the latest pay-out to them anyway means that the Four – dubbed ‘the unacceptable face of capitalism’ when MG Rover went under – have now run out of excuses as to why they can’t honour their commitment to workers.

A million quid each from Towers, Stephenson, Beale, Edwards and Howe would be relatively small beer for them after all the money they extracted from MG Rover. But it would be a belated recognition of the very significant losses suffered by so many ex-workers.

And it would mean that the Phoenix Four finally honoured a promise they made to ex-workers back in 2005. It really is time for them to cough up.