The Crisis and National Labour Law Reforms: A Mapping Exercise 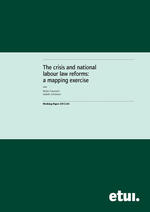 This Working Paper by Isabelle Schömann (ETUI) and  Stefan Clauwaert (ETUI) is highly recommended as it maps the crisis and national labour law reforms in various European countries either triggered by the crisis or introduced using the crisis – falsely – as an excuse. Such reforms generally render existing labour law provisions more flexible and loosen minimum standards, shifting the emphasis to soft law (deregulation).

In some countries it consists only of piecemeal although significant deregulatory measures, while in others it involves far-reaching overhauls of the whole labour code. Furthermore, in several countries fundamental changes are being made to industrial relations structures and processes which might jeopardise social dialogue and collective bargaining there.

The authors critically address this large-scale deregulation of labour law currently taking place, in particular the lack of democratic foundations underlying the reforms and their negative impact on fundamental social rights and workers’ protection.

The working paper is also complemented with an annex providing an analysis of the reforms on a country by country basis. These country studies will be regularly updated and are available and downloadable in English only.