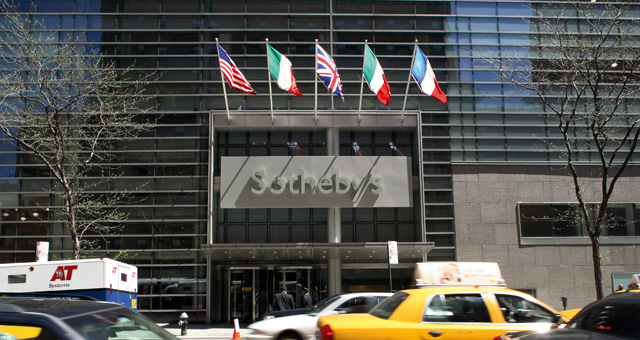 News comes through that the long running dispute between the Teamsters union in the USA and the auction house Sotheby’s in New York has been settled.

The three-year deal, reached in last week, increases wages by 1% in each year, lifts the starting salary to $18.50 an hour, and maintains the workers’ benefits, according to Jason Ide, president of Teamsters Local 814, which represents the 42 workers.

Sotheby’s had sought to permanently replace some of the union art handlers with temporary nonunion workers, but the deal protects the positions as union jobs, Mr. Ide said.

“The most important thing is these guys are going back to work,” Mr. Ide said. “They love being art handlers. They got into this line of work because they care about art and taking care of it.”

A breakthrough in the 10-month standoff came in May when Sotheby’s replaced its law firm, Jackson Lewis, with Proskauer. Bob Batterman, the Proskauer attorney who represented the National Football League during its lockout of players last year, took over the negotiations for Sotheby’s.

“Ever since that change happened, they wanted to bargain,” Jason Ide said. “We had a breakthrough. We weren’t hearing, ‘Take it or leave it,’ but, ‘Let’s work towards a resolution.’ “

He said that George Miranda, president of Teamsters Joint Council 16, which represents more than 120,000 Teamsters in the New York area and Puerto Rico, entered the negotiations around the same time he did, helping to produce what he called a “win-win” result.

A great result for the Teamsters and international trade union solidarity.