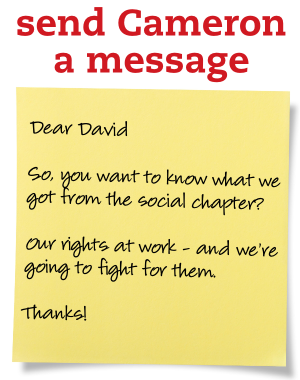 This week in Parliament, Prime Minister David Cameron made clear the contempt he has for rights at work. Cameron stood up in the House of Commons, and asked his MPs what we got in return for Britain signing up to the Social Chapter – they obediently chorused “nothing”.

The Social Chapter is an EU agreement to “promote improved working conditions and an improved standard of living for workers”.

But Cameron and his MPs think these rights are worth ‘nothing’.

Every day that goes by, it becomes clearer that the rights we rely on are not safe in the hands of Cameron and this government.

They simply don’t understand what life is like for ordinary people who depend on legal protections to make sure they are not treated badly or unfairly at work.

Your rights at work are worth fighting for – together, let’s send Cameron a message.

You can read the text of the Parliamentary debate here.

This message was originally sent out by Unions Together.