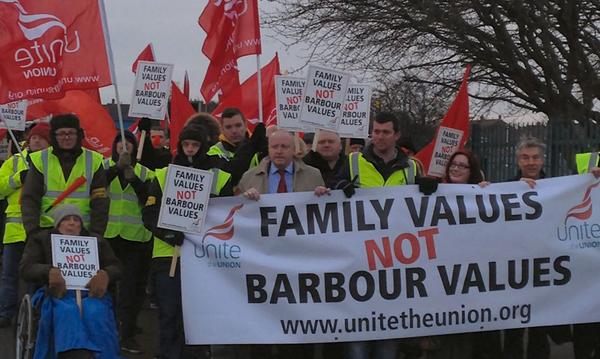 Unite members who have been on strike at the famous jacket and clothing manufacturer J. Barbour & Sons in Gateshead will be returning to work after accepting a significantly improved offer following talks at Acas.

The dispute attracted media attention after a number of media personalities such as TV presenter Janet Street Porter and journalist/TV pundit Kevin Maguire published articles in support of the strikers.

Other national newspapers carried news item on the dispute highlighting the “unfriendly family policies” being forced onto the workforce.

The workforce were forced to take strike action following a company announcement that there would be forced changes to their contracts. Workers accepted a deal which sees substantial increases in pay and day shift working for those with family and caring responsibilities.

J Barbour and Son Ltd had given warehouse workers a ‘sign or be sacked’ ultimatum over changes that included the removal of the unsocial hours payment and the introduction of a requirement to work until 11 o’clock at night.

But after four days of strike action in December and one week into a four week stoppage, management agreed to talks at ACAS.

Commenting, Unite regional officer Fazia Huassain-Brown said: “A majority of members have accepted this improved offer which sees increases in pay and day shift working for those with family or caring responsibilities.

“This hard won outcome would not have been possible without the resolve of the workers who faced being sacked if they didn’t sign up to inferior contracts.

“They stood up in the face of an employer who sought to ride rough shod over their rights and won significant concessions.

“We trust that we can now move forward with the employer in a spirit of cooperation and ensure the Barbour brand continues to be a global success story.”

Unite branches and activists, along with overseas unions including the United Steelworkers and local Labour MPs rallied to support the workers sending messages of support and solidarity to the picket line.