Updated: Steelworkers locked out by Cooper Tires in Ohio 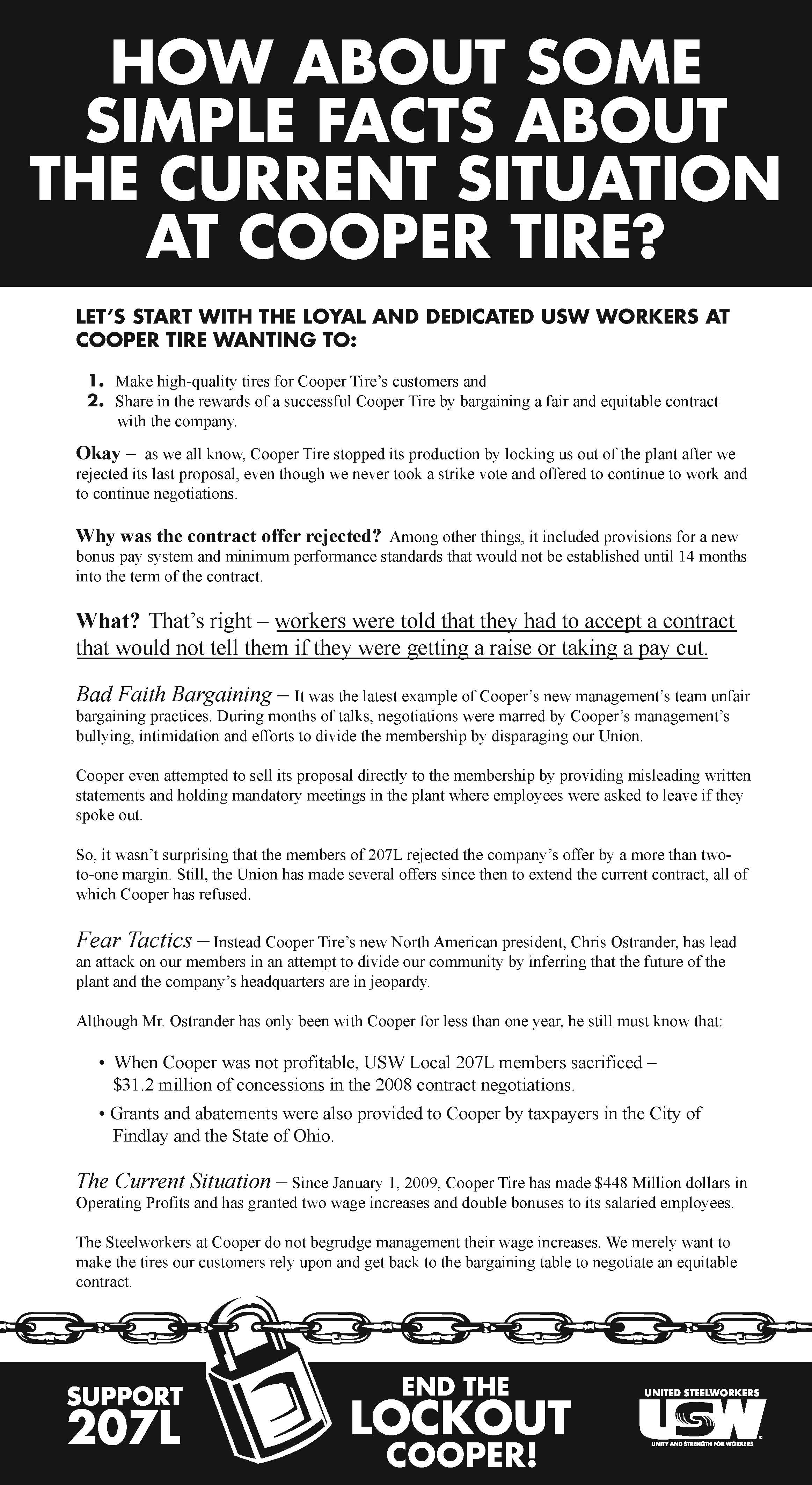 Cooper Tires locked out 1,051 members of USW Local 207L on November 29th at its profitable Findlay, Ohio facility, despite the union’s good faith offer to keep working while negotiations toward a new contract proceeded.

The USW said that the centerpiece to the charges is the company’s demand that bargaining unit members ratify a contract absent the full details of an incentive plan that could possibly result in major wage cuts.

Cooper insisted that its incomplete proposal would have to be accepted, ratified and implemented before necessary studies would be finalised. That meant workers would vote on a proposal not knowing if their wages were increasing or decreasing and by what amounts.

In total, the Steelworkers allege ten charges. They include refusing to bargain by conditioning continuation of talks on the union moving from its current negotiating position; falsely declaring impasse; disparaging the International union in meetings with bargaining unit members; and unilaterally changing conditions of employment by canceling scheduled work and extending the Thanksgiving holiday shutdown until the lockout began on November 29th.

The unfair practices also include the lockout itself and its continuation in support of a bargaining position tainted by the illegal labour practices cited in the charges.

Three years ago USW members had previously agreed to forgo wage rises and accepted a two-tiered wage system that meant new employees would start on lower wages. At the time Cooper Tire & Rubber was in the red to the tune of more than $200 million. During the crisis years tiered wage deals such as this were a key feature of many US automotive industry agreements.

Cooper is now back in profit and the USW is ready for the company to return to a single wage rate. Cooper management presented the USW with an offer that includes signing bonuses and some wage increases – in exchange for productivity improvements, tighter caps on holidays and more flexibility on pay. The offer also retained the two-tier wage system, which pays entry-level workers approximately $13 an hour, around half what experienced workers earn.

Cooper has hired a scab workforce to run the Findlay plant. In addition the union contract at the company’s Texarkana plant expires soon.

Teresa Brown, who has worked at the Finlay plant for the past 12 years said: “My husband and I both work in there. We have a kid in college, and I don’t know how I am going to pay for college—all because they want to be greedy. They are just trying to bully us”. Chico Ramirez said he has worked at the plant for 25 years and vowed to stay out on the picket line to achieve its wage goals.

These two plants account for nearly half of the tyre maker’s total US production. According to USW sourced information published by the Wall Street Journal, the replacement workers in Findlay are earning $17 an hour – a significantly lower amount than experienced full-time workers – plus a meal allowance.

The Steelworkers represents 850,000 members in the United States and Canada in a  variety of industries, ranging from glass making to mining, metal, paper, steel, tyre and rubber and other manufacturing sectors to the public sector, service and health care industries.

More news item on Cooper Tires Lock Out:
Steelworkers Union: Cooper Locked Us Out After We Boosted Company Profits.