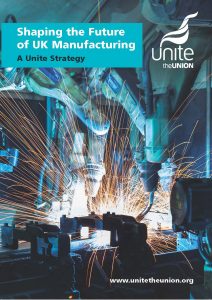 The Challenge of Brexit

Conference we meet at a time when manufacturing is being damaged by the Brexit chaos created by a Government who have no idea of how to handle the most complex negotiations that any country has ever taken since the end of the second world war.

We all remember days after the referendum pro Brexiteers saying that negotiating Brexit would be “easy”.

But for members in manufacturing the complexities of trade and exporting manufactured goods – back and forth across the Channel, across complex supply chains we knew differently.

That is why our manufacturing combine of shop stewards put together our own arguments to get a ‘Brexit On Our Terms’.

Unite warned that companies would hold back investment.

We needed to protect employment rights

We needed access to skills and a fair immigration system

The Government had not worked out impact of Brexit on manufacturing – and following last weeks publication of the Trade Bill it is clear they are still clueless.

The group Hard Brexit MPs – Michael Gove, Boris Johnson, Jacob Rees Mogg, Ian Duncan Smith, John Redwood are happy to see manufacturing jobs destroyed – just to get out of the EU – that is their end game.

They are not concerned that we will face a low skilled, low wage, low employment rights economy – it would be the completion of the Thatcherite project that was started in the 1970’s.

They are not bothered that 44% of manufactured goods are exported – and that manufacturing accounts for 70% of research and development.

They never mention that average earnings in manufacturing are £5000 more than the whole economy.

They just want out of the EU at any price.

And make no mistake Unite members will take no lessons from the likes of James Dyson who has advocated a “hire and fire regime’ to supposedly “kick start manufacturing” – this from a man who took his manufacturing to low cost Malaysia.

They Government has no plan for our members working in steel, in making tyres, in ceramics, papermaking and in glass and chemicals who will face the dumping of cheap products, notably from China, on our market without any trade protections – and we can be proud that it was Unite who have been at forefront of campaigning for protections to stop the dumping of steel and other goods to protect our members.

Delegates: We accept the decision of the country – members may voted to leave the European Union – but they didn’t vote to destroy jobs, their companies and their communities.

So you can be assured we will continue to campaign for the best possible outcome that defends decent jobs for the future and ensures that we maintain a strong manufacturing base in the UK.

One thing is clear, trying to stop the “digital revolution” is like trying to “un-invent electricity” – it won’t happen.

Unite has set out a clear structure and policy and one which I would certainly commend to our Union Reps here today and deserves your full support.

The lack of an industrial strategy from the Government has meant that there has been no consistent Government response to technological change and to the economic problems that our industries and our members face.

So why do we need an industrial strategy?

Take for instance the steel industry. We were warning three years ago that SSI at Redcar was on the verge of collapse and when it did the Government panicked – it was Unite and the other Unions who moved to try to defend our members jobs, pay and conditions and pensions.

We mounted a campaign to Save Our Steel that took our members to Brussels and Strasbourg to fight for our steel industry.

Those members are a credit to our Union.

A proper industrial strategy with ‘steel at its heart’ as Len McCluskey has described it could have saved steel jobs but the Government were caught out – trying to cobble together a plan at the last minute.

And look at great companies such as Vauxhall at Ellesmere Port and Luton taken over by PSA – now facing job losses because there is no overall plan to ensure we defend our “jewel in the crown” automotive industry and the auto supply chain.

The lack of an industrial strategy mean you get massive job losses announced at BAE Systems because of the “short termism” on spending our defence budget – tax payers money – on “off the shelf” kit from the USA and not ensuring that our helicopter and surveillance planes are manufactured here.

It is gratifying that not only have we defended jobs when faced with problems we have also put forward workable alternatives such as our “Wells to Wheels” strategy for the oil industry.

Our Union have been involved in some hard fought campaigns. I can’t cover them all – but it is worth mentioning…

But let’s also look at some successes:

It is Unite who have been at the forefront, of campaigning for skilled apprenticeships for young people, for women and for BAEM workers, with a real job at the end of training not low grade short term apprenticeships.

I am pleased to say that Unites’ industrial strategy was adopted by the Labour Party in their manifesto and that Labour Front Benchers now regularly seek our help, advice and support on manufacturing and industrial issues.