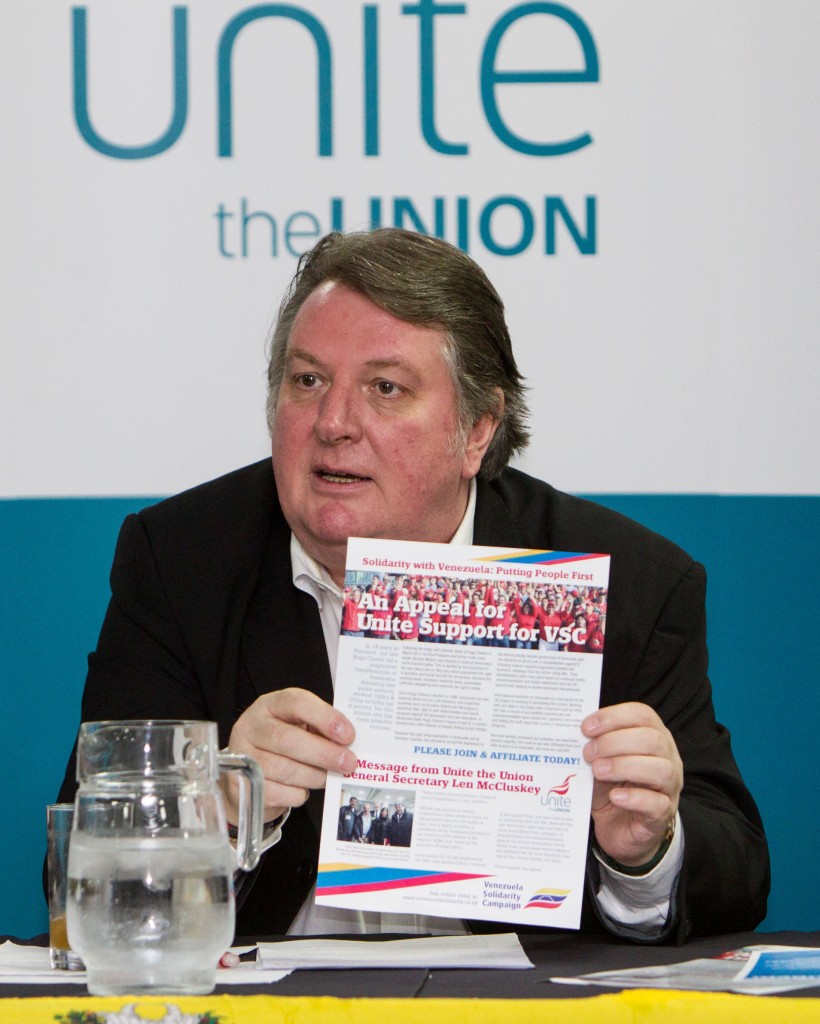 You will have heard at this and other conferences about progressive movements in countries such as Colombia in Latin America being persecuted, and working people across the world targeted for economic crises they did not cause, so its great to be speaking at  this meeting on Venezuela, where our solidarity is with positive changes.

Indeed, one of the great achievements of the late Hugo Chavez’s time in office was that Venezuela now has progressive economic and social policies and respects trade union rights.

Of particular relevance to the issues we are focussing on around collective bargaining this week is Venezuela’s Labour law – one of the most progressive laws of its type in the world. This was based on 6 months of consultation with working people and their organisations. Over 20,000 different proposals were submitted from trade unions and other groups.

There are many positive aspects to the law – but I would like to highlight a few key points, which I think are of particular relevance;

Furthermore, on May Day again this year increases in pensions, the minimum wage and public sector wages were announced, further improving the lives of millions.

Of course, such change has enemies, and powerful enemies at that. The former ruling elite of Venezuela who left so many Venezuelans living in terrible poverty want the former status quo returned. This anti-democratic, right-wing opposition, have international friends in this aim – including the United States

Therefore friends, at the current time, as we heard at this meeting from our Venezuelan guest yesterday , as Venezuela approaches elections in December, it is an important time for democrats all over the world to speak out and say that violence and intimidation are totally unacceptable against legitimate and elected governments, as we have in Venezuela.

The reason that we need to be vigilant is that violence, intimidation and a general anti-democratic character are dominant features of sections of Venezuela’s opposition.

As many of you will know this was taken to its logical conclusion with the coup d’etat in 2002, which temporarily ousted Hugo Chavez’ progressive government and replaced it with a right-wing, military dictatorship with the head of the Venezuelan CBI as the President!

We need to also be aware at the moment– showing echoes of Chile and the coup there against the progressive, socialist government 40 years ago – that such overt violence is not the only tactic used to destabilise and overthrow progressive elected governments.

Sometimes destabilisation plans are expressed in other ways, including abuses of economic power. Indeed, an economic sabotage of the Venezuelan economy is currently under-way, where even a fire in an oil refinery which cost dozens of workers’ lives last year has been found to be the work of far-right elements seeking to cause chaos in order to undermine and ultimately overthrow the elected government.

Whether is through violence, economic sabotage or other means, the aim of such destabilisation is clear: its illegal regime change.

That not my words. It’s the word from last week of a Venezuelan opposition leader Leopold Lopez – the campaign manager of their last presidential candidate.

In this context, its worth reminding ourselves of the basic facts as to what happened in April this year when former bus worker and trade union leader Nicolas Maduro won the election. The right wing candidate Henrique Capriles lost: he lost narrowly – but he lost.

Governments across Latin America, the UK, France, Spain and others in the EU recognised the results. But emboldened by the US, the right-wing opposition didn’t – in spite of all the evidence.

So immediately after the results were announced they claimed fraud. They had no evidence. In fact they themselves had signed off a dozen audits prior to the election backing the process. But they claimed fraud none the less – then Henrique Capriles used these claims of fraud as a pretext to encourage opposition supporters to “vent their anger,” and a dozen supporters of the governing socialist party were killed.

Why is this? Its because the right-wing and former ruling elite have never accepted that the majority have a right to create a new society that works for the majority for the first time.

That is why destabilisation and the use of the non-democratic path to oust the government has always been an open point of discussion in the Venezuelan opposition.

We are now in the middle of another destabilisation plan, including the economic sabotage and the damage to infrastructure I mentioned.

Indeed, the leader of the main right-wing party said last month: “The country cannot withstand more months with Maduro in power…Venezuela cannot and should not have to wait five years for a change”

That reminds me of the coup I mentioned 2002 when political protests were manipulated into confrontation as a justification for the army to enter the political arena and overturn democratic mandates.

And that’s why your ongoing support over the coming weeks will be so vital.

When they tell there lies of who is the majority; of the lack of democracy; of social collapse; or of how the majority want regime change you can play your role in speaking out so that in this corner of the world the truth is known.

To conclude comrades, the best way to honour Hugo Chavez’s legacy is to build solidarity with Venezuela’s social progress and expose plus oppose attempts from the anti-democratic, Right-wing opposition to undermine (and ultimately overthrow) the democratic will of the people.

All these forces have sought to take advantage of Hugo Chavez’s untimely death to overthrow democracy and social progress in Venezuela, but we should remember here today that Venezuela does however, have many friends, especially in the trade union movement.

I urge you to support our Venezuelan comrades and the Venezuela Solidarity Campaign in their important work, joining delegations to Venezuela and affiliating your branches and building these direct partnerships facilitated by the VSC where we can. The VSC does a lot of work for an organisation with a small budget, so any support we can give politically really does make a big difference.