Speech at the VSC Emergancy Rally January 31st in London 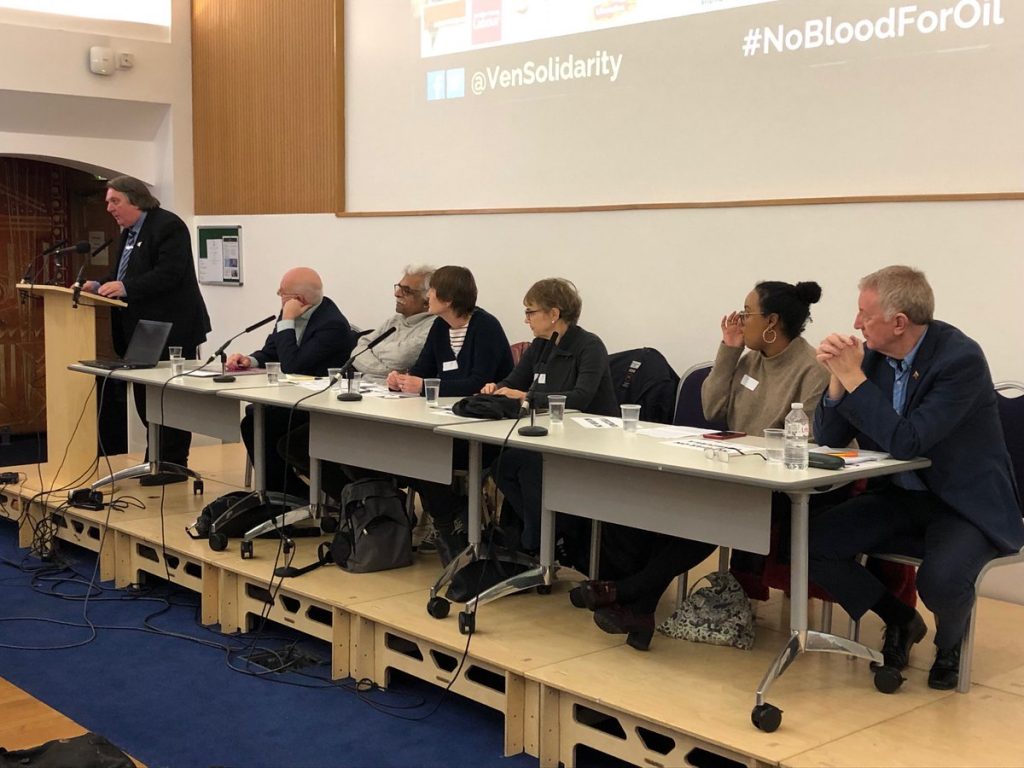 Good evening and thanks for coming out on such a bitterly cold evening here in London.

I am Tony Burke, Chair of the Venezuela Solidarity Campaign who called today’s event and I am also speaking on behalf of Unite the Union and Worker’s Uniting, our Global Union.

Our statement issued last week is clear in “condemning the US-led recognition of an unelected opposition leader, Juan Guaidó, as president of Venezuela.”

It “also condemns the actions of the governments of the UK, Canada and other countries that have slavishly followed the US lead.“

It also argues that “Over the past 20 years the US has endeavoured to destabilise Venezuela with economic warfare and a financial blockade in their attempt to assert its influence and control over the oil, gold and mineral-rich country. These actions, which clearly violate international law, now culminate in the recognition of an unelected opposition leader as president of the country – effectively a right wing coup attempt.”

It also states that “Workers Uniting strongly condemns the US threat of military action and its attempt to add Venezuela to the list of state sponsors of terrorism in order to justify such action.”

Let’s be clear. Such US-led ‘regime changes’ have been a disaster in other countries in recent years and there’s no reason to believe it would help the people of Venezuela.

This is not about democracy or human rights –its about gaining control of the world’s largest proven oil and petroleum reserves.

Nor is it about helping the people of Venezuela.

Polling suggests the majority of Venezuelans – both pro and anti government – are against tighter US sanctions, which damage the private sector and living standards of ordinary Venezuelans, including the poorest. Extending these further will only make things worse.

What is needed in such a situation is dialogue as a way for Venezuela to peacefully resolve its current difficulties as suggested by Mexico, Uruguay and others. Governments internationally should do all they can to support such a dialogue, but instead the Trump administration is introducing sanctions, threatening military intervention and trying for a coup.

These actions will not facilitate dialogue, but exacerbate difficulties and divisions.

Friends and comrades the last few years have seen a worrying return of the Right-Wing in Latin America with the gains made by progressive leaders across the continent coming under fire, as most exemplified by the far-right winning the Presidency in Brazil.

In light of this it’s important to keep up our solidarity and be clear that whatever problems countries like Venezuela face, neo-liberalism and US intervention is not the answer.

Indeed, with the right-wing in power, Argentina and Brazil are facing massive public sector layoffs and spending freezes, plus repression of trade unions and social movements.

Finally, I’d like to offer some hope in our discussions on Latin America and that is the victory of the left in Mexico, which has led to that government having a pro-dialogue position in Venezuela.

The victory in Mexico has the potential to greatly change the landscape not just in that vast country but also in the continent, and it has the potential to make real differences to working people’s lives and in terms of advances in trade union rights, as symbolised by the appointment of the President of Los Mineros Napoleon Gomez as a Labour Minister – a formerly repressed Trade Union leader who was exiled in Canada but now is rightfully back in Mexico

What a symbol of change!

We stand with the Left and Unions across Latin America, from celebrating victory in Mexico to fighting fascism in Brazil, to working together against illegal ‘regime change’ and for dialogue in Venezuela.

Let’s not let there be anymore Pinochet’s in Latin America – and stand clearly with social progress, and self-determination, against Trump’s intervention.