Speech at the TUC on the Trade Union Act. 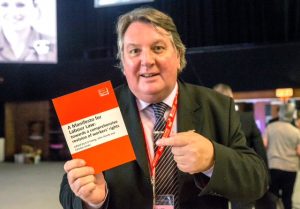 Congress, we have been calling for repeal of anti-union laws for 30 years – a call that has continued to fall on deaf ears.

But with the change of direction in the Labour Party, we now have the opportunity to move beyond repeal and draw up a new framework of trade union rights and freedoms for workers and our unions.

And I commend the work of the Institute of Employment Rights in being steadfast in supporting our unions and for producing their excellent Manifesto for a positive reform of employment rights.

In going beyond repeal the new framework must address three fundamental issues.

Firstly, we must have a right to organise.

Winning organising campaigns is important because a union presence in the workplace provides an independent ‘voice’ for workers and ensures that workplaces are more equal and safer.

Secondly, we must have a right to collective bargaining

The key impact of the anti-union laws has hastened the decline of union led collective bargaining at the sectoral level.

The loss of these bargaining rights has seen a major decline in workers’ wages in the past three decades – the share of national income going to salaries and wages has fallen from 65% in 1980 to 53% in recent times.

And no more bogus self-employment which undermine wages and conditions.

Finally, we must have an unequivocal right to strike.

Congress, we have lost count of the number of times our unions have been served with injunctions to stop strike and dispute action, sometimes for the most trivial reasons.

You know the old story – wake up a High Court judge, give him a brandy, show him a headline from the Sun – and the injunction is granted.

Without an unambiguous right to strike, collective bargaining is reduced to collective begging.

1 Response to Speech at the TUC on the Trade Union Act.