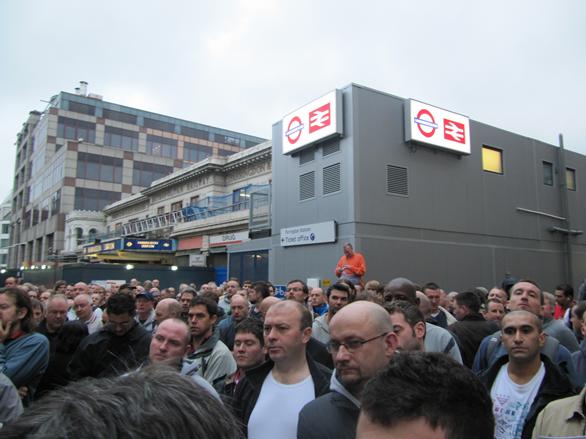 Demonstrators at the Farringdon construction site

A series of well organised demonstrations at a number of major construction sites in the UK were organised this week – and more are planned.

Highly skilled Unite construction workers descended on sites at Farringdon in London where Unite AGS Gail Cartmail who has overall responsibility for construction addressed a 300 strong demonstration, along with demo’s at the Olympic site, at Media City in Salford, and in Scotland and Newcastle.

At Farringdon – the new link into the Crossrail service, due to be launched by 2017, Unite members are installing complex electrics, plumbing and other engineering work. Unite say that the contracting firms – who generate millions of pounds of profit each year – want to cut their costs by ripping up long-established terms and conditions and offering staff semi-skilled pay rates. Gail Cartmail told demonstrators to prepare for a national dispute ballot.

The companies who are seeking pay cuts are some of the UK’s best-known building firms, such as Balfour Beatty, Crown House Technologies, Spie Matthew Hall, Shepherd Engineering Services and NG Bailey.

Unite regional officer Guy Langston said: “Our members in London are furious about this attack by these so-called reputable companies aimed at reducing our members’ income by up to a third. The companies are trying to bulldoze their plans through by ripping long-standing national agreements without any negotiation. These rogue employers should pull back from the brink as their brutal onslaught on workers’ skills, pay, and terms and conditions is causing widespread anger among workers.”