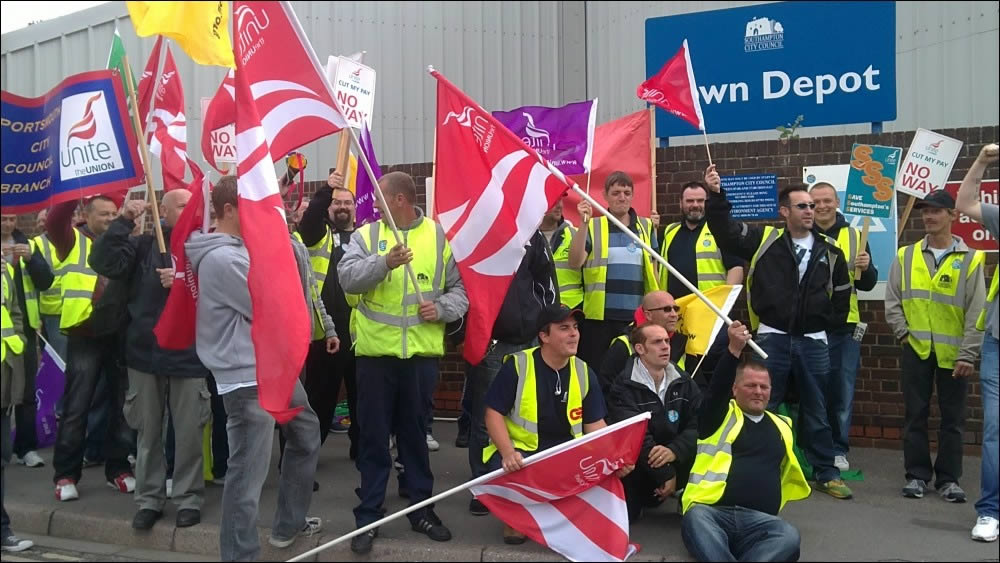 Civil enforcement officers (CEOs), car park maintenance engineers and bulk cash collectors will walk out from 00.01 hours tomorrow (May 31st) as strike action spreads at one of the south coast’s biggest councils.

The CEOs – better known as traffic wardens – and maintenance staff will start seven days of strike action which could see Southampton City Council hit by a £100,000 revenue loss.

Council workers, members of Unison and Unite, are taking a series of actions in coming weeks in protest at the city council’s imposition of double-digit pay cuts. Workers have been told to sign up to new contracts which offer far poorer terms or face the sack. They have until July 11th to accept the imposed poorer contracts of employment.

Ian Woodland, Unite regional officer, said the council’s actions were a warning to workers everywhere: “Southampton City Council are being extremely cynical in their conduct. They know people are terrified about losing their jobs so they are exploiting this as a moment to slash wages.

“We have repeatedly said to the council that there are better ways to make savings. All they have to do is sit down with us to talk about a shared way forward. They refuse to do so, preferring instead to bully and terrify workers into accepting an attack on their living standards.

“Some of the poorest paid in the council’s workforce are being told take a loss of thousands of pounds a year or take a hike to the dole queue. It is little wonder then that they feel that they have no option but to take action.”

Andy Straker of Unison added: “Council Leader Royston Smith knows very well that the way to make savings at the council is to work with the workforce and the taxpayers. Instead, he prefers to run this local authority through impostition and threats.

“These are times of tremendous anxiety and hardship for workers in Southampton but they will not be cowed into accepting horrendous pay cuts, particularly when there are other ways that the council, if better run, could save money. We are saying to the people of this city, first this council will come for our jobs and wages but next they will come for your services. This is the moment to stand up for a better deal for Southampton.”

The unions have urged Conservative-led Southampton council to improve its finances by working with staff and unions. Unite and Unison have also repeatedly asked for face-to-face dialogue with the council over its plan to force through a staggering £67m in cuts over the next four years but on every occasion the requests have been ignored by Councillor Smith and his administration.

Industrial action continues throughout the city including action short of strike, such as removal of private car use to provide services, overtime bans and working to rule continue throughout the whole council.

Refuse collection set for Saturday June 4th to catch up from the Bank Holiday will also not take place as refuse workers take a further day of strike action and working to rule measures.

Unite and Unison members’ strike committee will be meeting on Tuesday May 31st to discuss escalating action across the city. The unions have also called a joint mass meeting for 2nd June in the city to be addressed by Unite general secretary Len McCluskey and Unison deputy general secretary Keith Sonnett.

Daily Echo Update with poll on paying for parking while strike is on.