Manchester United manager Sir Alex Ferguson was the keynote speaker at a conference on Apprenticeships and Training in the Chemicals and Science industry today at the Mechanics Institute in Manchester – the birthplace of the TUC. Organised by Unite and the Sector Skills Council for the Chemicals and Science based industries COGENT – we were delighted when Sir Alex agreed to speak on the importance of apprenticeships and and training. And we got an added bonus when Sir Alex talked about the role of trade unions in his life.

An array of speakers from the industry, trade unions (including myself) made presentations on the need for industry to take on more apprentices and train their workforce and took questions and comment from the floor before Sir Alex, who had been at a celebration of his 25 years as manager at Manchester United the night before spoke in a very relaxed manner about the importance of training, apprenticeships – and trade unions. 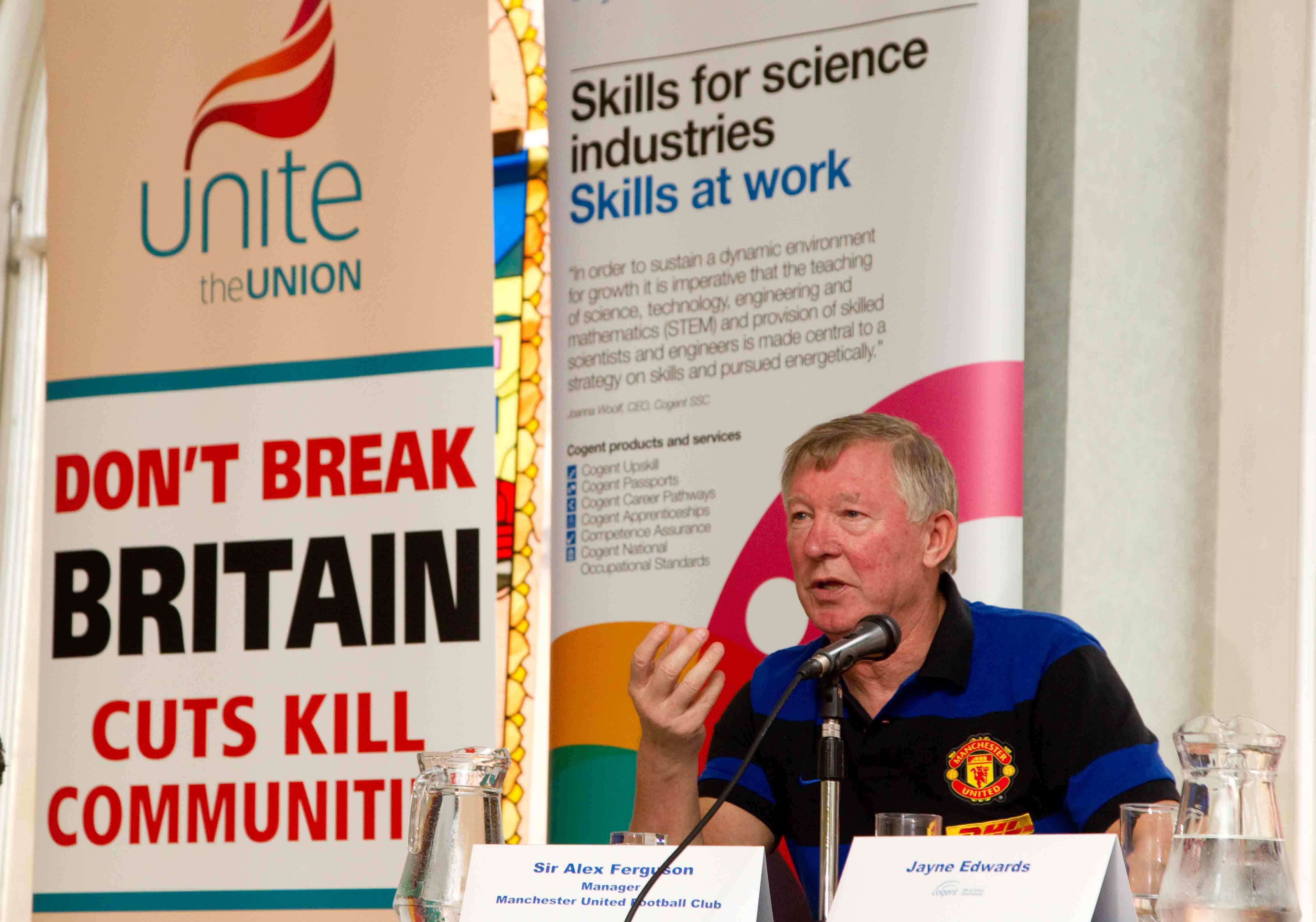 Sir Alex, who was toolmaker in Glasgow and a AEU union shop steward highlighted the importance of apprenticeships, training and funding to youngsters.

He told the delegates to the conference: “It is only when you had the opportunity to have an apprenticeship did you realise the long-term benefit. Anyone who had that experience will have appreciated the skills they learned. Over a long period in industry, apprenticeships have been neglected and that has to change”.

“Great Britain was admired throughout the world for its ability to produce quality through the craftsmanship of its workforce and now is the time to bring about a regeneration of those times.

“Apprenticeships offer that opportunity for business to build from within their own confines and create an atmosphere of loyalty and continuity”.

He spoke about the importance of learning from older workers, as he did when he was learning to be a tool maker.

He said: “What I learned from the old guys on the shop floor was instrumental. The skills I got as a tool maker weren’t just in grinding. You learned all the skills and became well-rounded. It is amazing what happens when you give young people the opportunity.”

Sir Alex spoke of his time as an apprentice toolmaker. He said: “What I learnt from the older guys in the shop, that was an education. That education from working with older people is phenomenal. That was a great period of my life, a great period, and it does shape you.”

Sir Alex also spoke of Manchester United’s own apprentices, such as David Beckham, Ryan Giggs and Paul Scholes saying: “I don’t just get quality from all the skills we’ve taught them, I get loyalty. I get incredible loyalty out of that. It’s amazing what can happen when you give young people an opportunity. They thrive on it, they don’t let you down.”

Sir Alex said it was only when people had the opportunity to have an apprenticeship that they realised the long-term benefits.

Quizzed about whether promising young footballers in United’s academy system were taught skills from other areas, the United boss said the club had a successful tie-in with Trafford school Ashton-on-Mersey, where young players could take GCSEs and other qualifications in a range of skills.

But he added: “At the moment we are allowed to do 12 hours of education and 12 hours coaching. I think the balance is not right. I think there should be more coaching. The time is important in terms of teaching the skills.”

Sir Alex also described how his formative days working in Glasgow as a tool maker had influenced his political views. He talked about the unions officials he worked with including Jimmy Reid, attending union meetings in Glasgow and the influence trade union officials had on his life and being chastised by his grannie who accused him of being a Communist.

The video above is from the Manchester Evening News site.

In all a very successful day – a big well done as well to Unite Learning Organiser Geoff Southern for organising the Conference.

This entry was posted in Media, Trade Unions, Unite The Union, Workers Uniting. Bookmark the permalink.