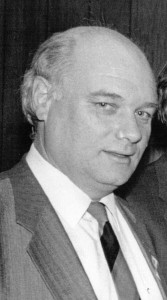 Sean Geraghty was born in 1936 and sprang from a close-knit, proudly republican and socialist family from the Liberties district of Dublin.

His mother was an Irish Communist Party member and his father was in the Fianna and remained a lifelong republican.

Sean was the eldest of five sons, all of whom were staunch trade union activists and officials.

He was originally apprenticed as a coppersmith and came to London in 1956. After a period in the contracting industry he obtained a job at Odhams Press as an electrician in the early 1960s.

He became branch secretary of the London Press Branch (Fleet Street) of the Electrical, Electronic, Telecommunications and Plumbing Union (EETPU) in the mid-1970s.

The branch was already a thorn in the side of the right-wing leadership of the EETPU under Frank Chapple and then Eric Hammond.

The union tried to close the branch down on numerous occasions while the branch was under Sean’s stewardship, as it had done under his immediate predecessors Ben Bleach and Len Dawson.

But the members defended their union representatives and their branch and felt the support of the print unions in Fleet Street as the other chapels closed ranks to defend them throughout the 1970s and ’80s.

Fleet Street workers and the sparks of the press branch often acted in solidarity – as when they shut down the newspapers in defence of the dockers imprisoned in Pentonville in 1972.

Sean found himself being sued again in 1982, when print unions and the press branch participated in the TUC Day of Action in support of the NHS. The Daily Express obtained an injunction to stop the action by the electricians which was ignored.

Sean was named in the injunction as press branch secretary. He was fined and had costs awarded against him.

The fine was paid anonymously – but under threat of further industrial action the issue of costs mysteriously disappeared into the Fleet Street mist. 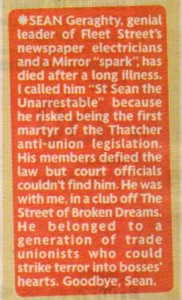 Paul Routledge writes about Sean in the Daily Mirror

The Tory war on trade unions was waged throughout the 1980s with one epic struggle after another for jobs and union rights.

At every stage the electricians of the press branch and the print union chapels stood side by side in solidarity, particularly in support of the miners in their fight for survival in 1984-5.

Sean remained branch secretary throughout the Wapping dispute when his own trade union – under the same leadership that had tried over two decades to destroy his branch – collaborated with Murdoch to recruit a pirate workforce to replace the entire unionised staff of Times Newspapers and News Group Newspapers.

The press branch electricians supported their print union comrades throughout the dispute and were themselves made redundant at the end.

In 1989, shortly after the EETPU was thrown out of the TUC, most of the press branch electricians sought refuge in print union Sogat.

Sean remained at the Mirror for a period but eventually became a staff officer of Sogat, looking after members in the print sector and keeping contact with the handful of genuine trade unionists working quietly inside Fortress Wapping whom Murdoch had unwittingly recruited for their electrical expertise.

He was always there to support workers’ struggles in Britain, in Ireland and in the international movement, and was feared and loathed by employers – as when the Daily Express published a full page in the paper designating him Public Enemy No 1.

Sean became one of the best known characters in Fleet Street. Admired and respected by printworkers, he was always closely identified with whatever the current battle or campaign fighting to win better conditions or justice happened to be.

He was a wonderful comrade and the epitome of the fighter for trade union rights and social justice.

After a memorial event in London, he will be buried in Dublin on July 24th beside his beloved wife Breda. He leaves a daughter and three grandsons, and is survived by two brothers.