One of the great institutions of northern England is the Working Class Movement Library in Salford whose collections are a treasure trove of social and labour history. Staff there are now seeking to add to these by means of a project called ‘Invisible Histories; Salford’s Working Lives’, drawing on the memories of ‘ordinary’ people who did ‘ordinary’ work. In neither case, of course, does the word ‘ordinary’ really apply.

The project is funded with £34,000 from the Heritage Lottery Fund which has always been very good about helping historians of the everyday as well as the exotic and stately homes. In order not to be overwhelmed, research is starting with a focus on three famous employers, two past and the third still present albeit wholly transformed. That latter change is something which particularly interests the library.

Project organiser Carrie Gough says: “These workplaces represent the enormous changes in industrial working life that took place between the 1870s, when industry flourished in Salford, to the 1980s where many local businesses vanished completely. ‘Invisible Histories’ hopes to capture tales of Salford’s industrial heritage, preserving them for future generations – before local knowledge of these disappears for good.” 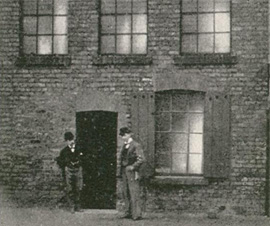 The three companies are Dicky Haworth’s cotton mill, the electrical engineering company Ward & Goldstone and Agecroft Colliery. Gough says: “We are keen to hear from anyone who may be interested in taking part in interviews regarding life within these workplaces. We’re asking: did you work there? Do you know somebody who did? Do you have memories or stories that would help us understand what they were like? If you are interested in sharing a tale or two, being recorded for posterity and contributing your memories to our project then please get in touch”.

The firms were mammoth in terms of today’s workforces, although not always in terms of productivity, much as Sheffield produces steel in quantities comparable to the days when there were 60,000 more jobs. Richard ‘Dicky’ Hudson employed 3000 people in Ordsall at one of Europe’s largest cotton mills.

Agecroft colliery in Pendlebury was mined first between 1844 and 1932 and then again in the late 1950s, showing how advances in technology can make previously abandoned coal seams reaccessible. As late as 1958 there was one of those terrible accidents associated with coal-mining when a misunderstanding in signalling led to one death and 12 serious injuries in an explosion.

The pit closed after the 1984/5 miners’ strike. The third and last business, Ward & Goldstone, continues albeit largely in Estonia and Croatia so far as jobs are concerned. A classic creation of northern and Jewish entrepreneurs like Marks & Spencer, it was founded by Meyer Hart Goldstone and James Henry Ward in Manchester’s Gorton in 1882.

The firm made good use of changing work patterns by converting a succession of redundant mill buildings for its own use. After various changes culminating in a management buyout it is now Ionix Systems based in Leigh and employing 660 people at its various European sites.

If you can help with ‘Invisible Histories’, please do, and please spread the word.

In case any philanthropic millionaires are reading this, it is worth reprinting the Library’s precis: “The Working Class Movement Library is a charitable trust, and is recognised at home and abroad as one of Britain’s most important collections of working class history. We believe that in these turbulent times such history has never been more relevant, and we want as many people as possible to know about and use the Library. We need to find £80,000 each year to keep the Library going – find out more by clicking on the Working Class Movement Library logo at the top of the page.

First blogged by The Guardian’s Northern Editor Martin Wainwright on September 14th on The Northener Blog.

1 Response to Salford searches for its workers’ ‘invisible histories’