Report outlines how Nissan is violating human rights in Mississippi. 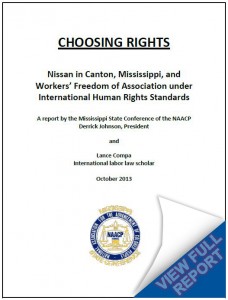 An extensive report by Mississippi NAACP President Derrick Johnson and international labour law expert Lance Compa was  released in Washington, D.C. on October 8th showing that Nissan in Canton, Mississippi, is in violation of international labour standards on freedom of association through its aggressive interference with workers trying to exercise their fundamental right to organize a union.

The report, which also will be outlined at events in France and Brazil, concludes that under international law, the company should respect human rights standards on workers’ freedom of association, including the right to organize and the right to collective bargaining. But in the Canton plant, according to the report, Nissan has launched a campaign of fear and intimidation to nullify these rights.

“Under international law and pursuant to its own stated commitments, Nissan is supposed to respect human rights standards on workers’ freedom of association – the right to organize and the right to collective bargaining. But in the Canton plant, Nissan has launched an aggressive campaign of fear and intimidation to nullify these rights,” said Johnson.

“Our research shows that Nissan is not living up to the standards of worker treatment enshrined in International Labor Organization (ILO) core labor standards, UN human rights principles, and other international norms. It also belies Nissan’s own public commitments to honor international standards through its membership in the United Nations Global Compact,” said Compa, an American lawyer currently based in Europe. “Workers’ descriptions of how they are treated behind the walls of the massive Nissan plant in Canton, Miss., affirm that Nissan is systematically interfering with the internationally recognized right to form a union.”

The International Labor Organization’s (ILO) 1998 Declaration on Fundamental Principles and Rights at Work and ILO Conventions 87 and 98 are the foundation of international standards on workers’ freedom of association. They prohibit:

Workers at Nissan’s Canton plant, who are supported by a growing student movement, community organizations and trade unions around the world, described in the report treatment that violates the ILO’s 1998 declaration and conventions 87 and 98 – standards included as well in the UN Global Compact, which Nissan joined in 2004.

Worker Jeff Moore, a body shop quality technician hired in 2001, stated that anti-union intimidation began early on. “In the first meetings, managers told us that Nissan is totally non-union and didn’t want any part of unions, that unions make plants close,” said Moore. “Everything they said about unions was negative, nothing positive. It’s like they were drilling it into our heads, stay away from the union,” said Moore. 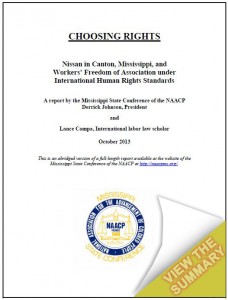 Workers also recounted “captive audience” meetings in which they were forced to watch films and hear speeches filled with implicit threats of plant closure if they formed a union, and orchestrated one-on-one meetings with supervisors warning of dire consequences if they choose union representation.

Nissan, the report says, also targets their anti-union behavior at hundreds of “associates” or temporary workers, known as precarious workers globally, many of whom do the same work as regular Nissan employees but are paid lower wages and have less job security. The report concludes temp workers, because of their tenuous situation, often feel even more susceptible to the company’s intimidation and climate of fear if they support a union.

The report’s authors say call on Nissan to change its practices; specifically:

The report also recommends that socially responsible investment firms “ … re-evaluate their portfolio holdings of Nissan stock in light of ILO standards and the company’s actions at the Canton plant, and engage with Nissan management to encourage adoption of the recommendations in this report” and that “ … The United Nations Global Compact and the OECD … consider whether the company’s actions in Canton are consistent with its commitments to, and obligations under, international labor standards.”

Nissan recognizes and bargains with unions at almost all of its operations globally, but not in the U.S. Nissan workers and their supporters want Nissan to change how it treats workers, including:

This report first appeared on the Do Better Nissan website.

Thanks to the United Auto Workers.