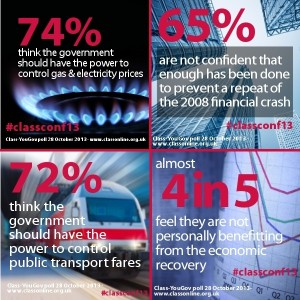 A new poll shows 4 in 5 people are not benefiting from the “economic recovery” according to the Centre for Labour and Social Studies (Class).

The union supported think tank says a new poll in the same week as official figures show the country’s GDP has grown at its fastest rate in three years, a development hailed by George Osborne as evidence that the country is on “the path to prosperity.”

But a Class – YouGov poll found that almost 4 in 5 people do not feel that they personally are benefiting from this growth. The poll’s findings come as Class is holding its first policy conference tomorrow in London at the TUC.

You can read more about the poll’s finding including the full analysis here or by clicking on the graphic.