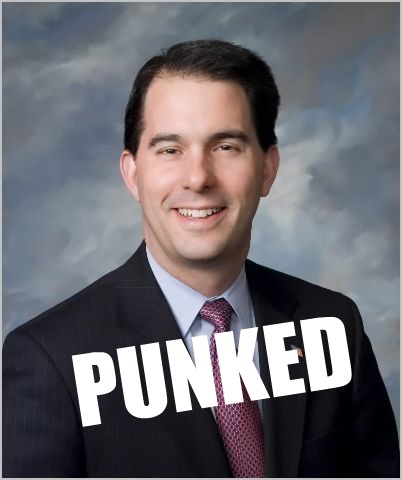 From a midnight pajama party in a Madison bar to a rally in front of Gov. Scott Walker’s Wauwatosa home, thousands of Wisconsin volunteers kicked off the official signature gathering period to put Walker’s recall before the voters next year. Recall forces now have 60 days to gather some 540,000 signatures.

At the pajama party, where participants were set for action at this morning’s official 12:01 a.m. start of the signature gathering clock, Erik Kirkstein a spokesman for United Wisconsin told the Badger Herald:

The people of Wisconsin have been waiting for this for months. This is the culmination of citizens all across the state, and we can’t wait to recognize them and start [the recall] off on the right track.

Anger of Walker’s elimination of the right of nurses, teachers and other public workers to bargain for a middle-class life was the driving force behind this summer’s successful recalls of two of Walker’s key backers in the state Senate. Now, says Wisconsin State AFL-CIO President Phil Neuenfeldt:

Working families in Ohio went to the polls and voted to support Ohio’s public employees and their right to collectively bargain. Unlike Ohio, Wisconsin workers do not have the opportunity to put a referendum on the ballot. Thankfully, we have the right to recall. [The] win in Ohio has energized and excited Wisconsin workers to recall Gov. Walker and put a stop to his attack on working families.

In order for Wisconsin to have a strong middle class we need to change direction.  Over 65,000 Wisconsinites, half of them children, are being kicked off Medicaid; 40 percent of our children’s classrooms are increasing in size; working families are being made scapegoats for budget situations they didn’t create and family-supporting jobs are not being created at the rate Wisconsinites expect. This is not the Wisconsin way and the citizens of the state have taken it upon themselves to change course.

For more on the recall effort visit United Wisconsin here.