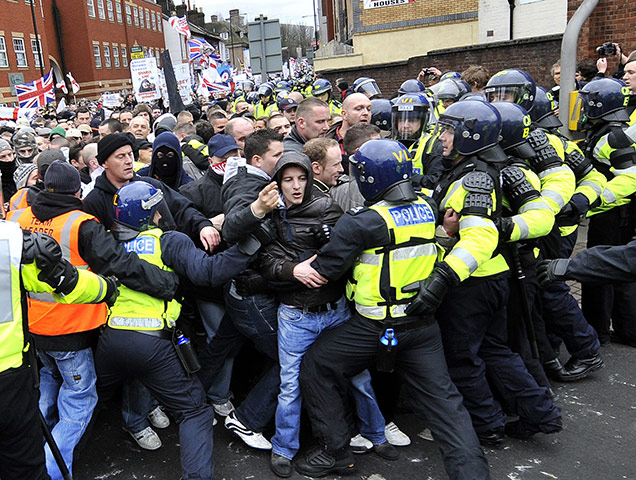 The right wing and racist English Defence League are threatening to attack demonstrations and rally’s organised in support of Public Sector strikes on November 30th.

One EDL splinter group, stated that it considers any left wing or anti-cuts activists now to be “fair game”. A north-east wing of the EDL – the Infidels have been blamed for attacking an Occupy Newcastle camp in which one protester was taken to hospital and others injured. A statement from the leader of the Infidels faction, John Shaw, states: “We have decided to put all our efforts into opposing everything you do regardless of the issue at hand, it’s your organisations we oppose. Every event you hold will be a potential target along with your meetings, fund raisers and social events.”

The TUC along with Unison and Unite said they are taking these threats seriously and discussions are taking place with the police to minimise any disruption on picket lines and marches.

Members of the EDL have recently been involved in attacks on anti-racist and anti-cuts protesters, as well as attempting to target the Occupy movement which has camped outside St Paul’s Cathedral.

Nine days ago an EDL faction attempted to attack the Unite Regional headquarters in Liverpool. Online messages from the EDL in Merseyside stated they were “patrolling for leftys (sic)”. Those they finally identified were in fact council workers protesting in the Liverpool city centre after they lost their jobs when a contractor went bust. A march of female asylum seekers has also been recently targeted by EDL supporters in the city.

Unite general secretary Len McCluskey said the union movement would not be cowed by a group whose only concern was “spreading fear” instead of advancing the rights of working people. “Trade unionists stand against everything the EDL stands for,” he said. “Trade unionists have fought long and hard for a fairer society, one with respect at its core. Ultra-rightwing groups care about nothing other than stoking hatred, which is why they have no place in our communities.”