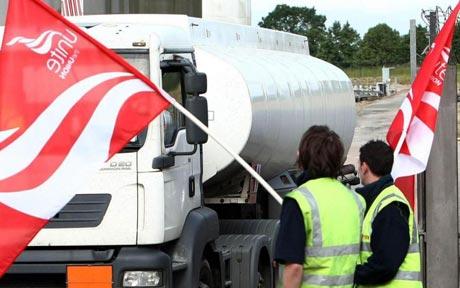 As oil tanker drivers meet around UK Unite has warned of the growing anger over sector’s insecurity and said that the UKs multi-billion pound fuel distribution industry should put its house in order – or be regulated to do.

Unite represents 3000 UK tanker drivers, who are to hold a series of meetings around the country today (Sunday) to discuss changes urgently needed to stabilise the sector.

Unite General Secretary Len McCluskey, has written to all seven of the major distribution companies in the country inviting them to attend a “no strings” summit to examine how the operation of the increasingly volatile but essential national industry can be improved.

Such is the mounting frustration of the workers, whose repeated attempts to engage the employers over their concerns have been ignored, one issue certain to be discussed by the tanker drivers is preparations for possible strike action.

According to Datamonitor (October 2010), the market value of UK service stations alone is set to near £100,000 million ($110,000 million) by 2014, a jump of more than 20 percent in the five years since 2009.  However, the dash for profits – boosted by high pump prices and a systematic assault on working conditions – has also made the sector unstable.

Unite believes that the industry is fast approaching another period of upheaval as oil companies concentrate their business interests on the drilling side, leaving the refinery and distribution side at the mercy of market forces.  One leading oil company, Total, has said it is pulling out of the UK altogether.

For eighteen months the union has been urging the industry to work with it on a package of stability measures.  But with the major oil companies showing little interest in talks, the union is now urging the seven major distributors, including DHL and Wincanton, to take the lead by working with it to settle the national fuel supply. 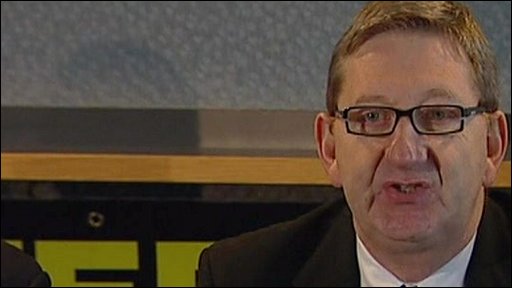 Len McCluskey added: “It is unacceptable that an industry of such national importance can operate without any stability mechanisms in place or without responsible regulation.  This commodity is too important to be left to the vagaries of the market.  ”This is now a very serious situation.  The industry is on the highway to catastrophe – it is chaotic, a key workforce is utterly fed up and our genuine efforts to address these issues are being ignored.  This industry must understand how serious my members are. People are fed up paying exhorbitant prices at the pump but the tanker drivers, too, are being treated abysmally.  They get passed from pillar to post as companies move in and out of the sector so it is little wonder that they are thoroughly fed up.

“It is time to work together to settle this essential sector.  We urge the distribution companies to take up our invite.  Equally, we have a message to government – they cannot sit this out because they too have a role in bringing security to the nation’s fuel supplies.”

Unite says that the meeting must take place at the earliest possible date as increasingly angry drivers want to see progress.  The distribution companies invited to talks with Unite are Wincanton, Hoyer, DHL, BP, TDG, Sucklings and Turners.

In the letter, Len McCluskey says; “I am writing to invite you to join me with others from across the fuel distribution sector, in a summit discussion on the issues we jointly face in this most essential of supply networks.  I make this invitation without preconditions in a genuine attempt to bring calm and stability to the sector at a difficult time for our members and the communities we serve.  ”Our members have genuine concerns over on-going developments in the sector that, given a greater level of understanding by all parties, I believe you would share. Equally you have challenges that we need to understand in addressing these concerns in the way we have suggested in previous communications.

“I trust that the suggested summit will give us the opportunity to discuss our respective positions in an open and constructive manner.”

Datamonitor has estimated that the major oil companies now make over $100,000 per employee per year.  There are also reports that fuel prices could rise by another 10p a litre in coming weeks.  However, the driver workforce has seen working conditions deteriorate severely over the past decade.  Some workers have been passed so frequently between employers that they now have six different pension providers.  Drivers are also reporting mounting pressure to “beat the clock” as employers pressurise them to complete deliveries faster.  Further changes are expected to the industry as leading global oil companies pull out of UK distribution leaving it to the contracting companies to jostle for position, moves which will see the industry become even more unstable.