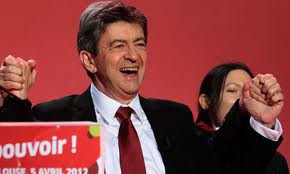 Jean-Luc Mélenchon will present a progressive alternative to the austerity policies which are being implemented across Europe and will address the shortcomings of European integration.

One of the most influential leaders of the ‘Other Left’ in Europe, he will discuss the ‘historic failure’ of social democracy; its inability to shape a European Union based on solidarity and social justice. He will present the solutions of the “Front de gauche” (Left Front) to the systemic crisis. The introduction will be followed by a question and answer session with the public.

Jean-Luc Mélenchon was a cabinet minister in Lionel Jospin’s government (2000-02) as well as a member of the French Senate (1986-2009). He was a long-time executive member of the Socialist Party (1977-2008). He left the PS in 2008 and created the Left Party which is part of a wider electoral coalition, the Left Front. This umbrella organisation is similar to Syriza in Greece and works closely with Die Linke in Germany. In May 2012, Jean-Luc Mélenchon ran for the French presidency. In the first round of the election, he secured 11.1% of the share of the votes nationally (over 4 million votes). Since 2009, Mélenchon has been an MEP.