Preserving The Future Of Aluminium In Quebec. 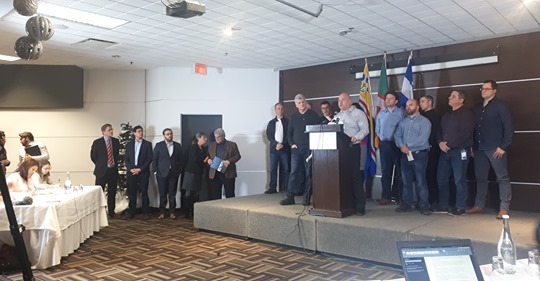 From the @steelworkers in Quebec Canada, December 19th, 2019.

Aluminum workers from the United Steelworkers joined elected officials from the Saguenay-Lac-St-Jean region, union members from CUPE and Unifor, and other socio-economic stakeholders to demonstrate their concern about the new free trade agreement with the United States and Mexico and fears that Quebec aluminum will emerge as the big loser in the new trade deal.

They demand concrete measures from the federal government to protect Quebec’s aluminum and secure the future of these good jobs in Quebec.

The CUSMA certainly stipulates that 70% of auto parts containing aluminum must come from the North American zone for a vehicle to be exempt from customs tariffs. But a wide gap remains: it will be enough for aluminum from another continent to be melted and processed in one of the three participating countries for it to comply with the treaty.

“To consider that a part made in North America with foreign aluminum fulfills the North American content requirements is to make fun of us! We do not understand why the rules that apply to steel do not apply to aluminum,” said the presidents of USW Local 9490 Alma refinery, Sylvain Maltais and of Local 9700 representing ABI in Bécancour, Éric Drolet.

Steelworkers representative Alexandre Fréchette is astonished at the flip-flop of the aluminum lobby, the Aluminum Association of Canada: “Are the big bosses of the multinationals happy with the status quo since they have interests all over the planet? Have they thrown cold water on the spokesperson for their lobby in Canada?,” he asked.

The Steelworkers have little doubt that the agreement will be adopted. However, they urge the government to take vigorous measures to support Quebec’s industry. “Vague statements about aluminum dumping monitoring mechanisms will not reassure us. It takes investments to keep our factories competitive, on the cutting edge,” said Sylvain Maltais.

Rio Tinto has put its modernization and expansion projects in Saguenay-Lac-Saint-Jean on hold for the past few months. “The recent episode of the trade deal adds fuel to the fire. The federal government must show with concrete gestures that it is not abandoning Quebec aluminum and that it is ready to mobilize for its future,” said Sylvain Maltais.

Recalling that the government of Canada collected more than $1.2 billion in tariffs during the steel and aluminum dispute with the United States, these funds can serve as an incentive, the unionized aluminum workers believe. “The Canadian government’s reluctance to defend our aluminum in the CUSMA negotiations is distressing, as is the government’s disregard of deferred investment in the aluminum sector. Ottawa needs to correct this quickly!,” said the representatives of the unionized aluminum workers.

The United Steelworkers, affiliated with the FTQ, is the most important private sector union in Quebec. It brings together more than 60,000 workers from all economic sectors.