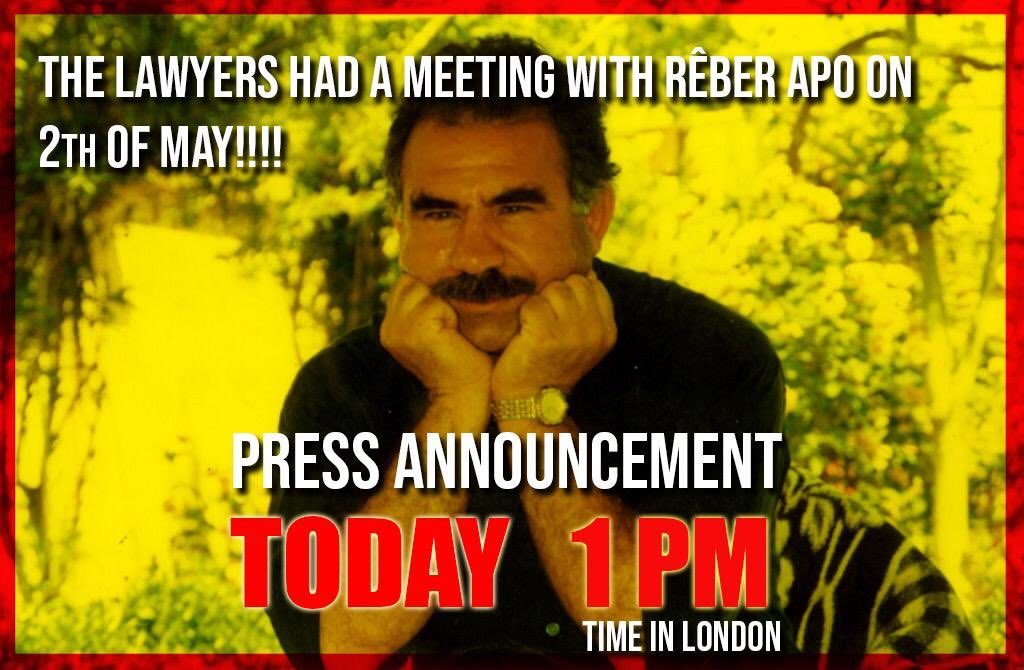 The Turkish-imprisoned political prisoner and founder and leader of the Kurdistan Workers’ Party (PKK), Abdullah Ocalan, received a visit by his lawyers on May 2nd, for the first time since 2011, a law bureau representing him said in a statement today.

Ocalan lawyers’ visit to the Imrali Island in the inland Marmara Sea, where the Turkish government holds the high-profile prisoner, comes as hundreds of politically-jailed Kurds are on a hunger strike to break a policy of isolation on the PKK leader.

The Istanbul-based Asrin law bureau did not provide further details regarding the visitation, nor did it explain why they informed the public almost four days later, as the hunger strike goes on.

The visit also comes at a time of rising death toll in recent Turkish army-PKK clashes, as well as President Recep Tayyip Erdogan’s pressure on the country’s supreme electoral board to renew the March 31 local elections in Istanbul, where the pro-Kurdish Peoples’ Democratic Party (HDP) urged its voters, roughly 12 percent of the population in the megalopolis, to vote for the opposition candidate, triggering an end to Islamist-rooted rule in the city.

“A statement regarding this meeting [with Ocalan] is to be made at Taksim Hill Hotel at 15:00 [GMT 13:00]. All the media workers are invited. Please take note no questions will be taken after the statement,” the Asrin bureau said.

It will be seen if Ocalan has called for an end to the hunger strike, led by the HDP lawmaker, Leyla Guven.

Ocalan was last visited in January this year by his younger brother, Mehmet, a farmer from the Sanliurfa province.

“Mr. Ocalan’s health condition is fine, and we will be informing the public in more detail in the coming days,” HDP’s Co-chair Pervin Buldan said in a brief online statement about the brother’s visit.

The family visit Ocalan had was the first since September 2016 as the PKK and HDP call Turkey’s limitations on his rights as a political prisoner “total isolation.”

The PKK is locked in a nearly four-decades-long, on-and-off war over Turkey’s suppression of Kurds’ culture, language, and demands for self-rule as Ankara and its Western allies label the latter a “terrorist group.”

Although convicted of charges of “high treason” by Turkey after his kidnapping with the help of CIA in Kenya in 1999, Ocalan was instrumental in initiating 2013-2015 peace talks between the PKK and the government of the then-Prime Minister, Recep Tayyip Erdogan.

Unnamed Turkish state officials and HDP lawmakers, including the now-jailed Selahattin Demirtas, regularly sat down with him dozens of times to end the cycle of violence between Kurdish fighters and the Turkish army and come up with a political solution.

The negotiations and a period of ceasefire eventually collapsed when the HDP emerged with a sweeping victory in the Kurdish-majority provinces in the June 2015 general elections to deny Erdogan’s ruling Justice and Development Party (AKP) a single party government for the first time since 2003.

Despite his imprisonment for two decades now by the very state it is fighting against, the leftist PKK continues to highly revere Ocalan as a central and unifying figure for the movement.