Our unity will deliver justice 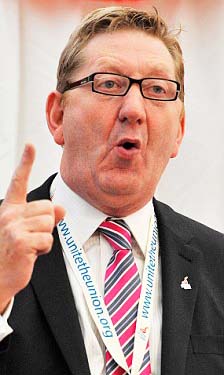 We are but a few weeks into 2012, but the need for our continued leadership to defend jobs, pay and the case for growth grows stronger with every dire economic proclamation.

From last March, when we filled the streets of London with members and non-members alike – nearly one million strong against the cuts – through June 30’s build-up on pensions, to the day of action on November 30, it has been the union movement that has offered resistance to the cuts.

From town to town, workers united.

Even in the Tory shires, nurses, teaching assistants, medical professionals and street cleaners stood together to say no, they were not prepared to work longer, pay more and get less for it in retirement.

For the first time in its 120-year plus history, the ATL took strike action.

Given that the extraordinary day of defiance by dedicated public workers on November 30 – action that was well supported by the public, according to polls – one would think the government would take note. Not a hope.

No sooner had placards been packed away than Danny Alexander was back setting the terms of discussion via the Today programme. Farce took hold when Eric Pickles stuck his oar in to undermine all confidence in the offer to local government workers.

For Unite’s part, the only way to restore a modicum of sense to proceedings was to go back to those hit by the changes – our members.

Our members in the Ministry of Defence, the health service, local government and the voluntary and community sector have all, to a sector, now comprehensively rejected the new terms.

The price of consultation is that Unite, along with PCS, was shut out of future talks, a petulant government response which thankfully has now been rethought to allow dialogue with all those concerned with the dispute.

Divide and rule solves nothing. It only reflects badly on a government unable to convince that it cares for or understands the concerns of working people.

Our successes in 2011 must now be built upon, and the immediate challenge is for us to walk together through this dispute.

If a clock is ticking it is only because George Osborne has set it, panicked by a fear that his government will not meet its sadistic deficit reduction schedule.

Remember, this dispute is the coalition’s doing. These schemes are in good health and their future was secured in negotiations only a few years ago.

So we will not be rushed or bounced. We will not bow to threats and exclusions and as a movement we will stand firm.

This week Unite’s members at Unilever begin the second wave of strike actions across the transnational’s British operations.

Only days after public-sector workers took action, their Unilever brothers and sisters in the private sector went on their first ever strike in this country because promises made to them were broken too.

Told that their pension scheme would be retained as a final-salary calculation, Unilever then ditched this commitment, even though the fund is in excellent financial health and there is no fiscal imperative for change.

The retirement plans of 7,000 workers are now in disarray because the third biggest consumer products company on the planet has decided that it does not want to manage “risk.”

It is a business which trades in every corner of the planet – the 18th wealthiest on the FTSE.

The pay of CEO Paul Polman jumped by nearly 50 per cent in one year to take his salary just shy of £7 million – some 285 times more than the average Unilever worker earns.

Yet it sees “risk” in retaining a healthy, well-funded pension scheme for British workers. But Unilever is happy to shift that risk.

Workers will still be offered a pension scheme, but it will be a career-average one, slashing around 20 per cent from retirement savings with many workers losing some 40 per cent of their value.

This is predatory capitalism. It is the continued snatching of wealth from those who create it and to deposit it in the boardrooms of the faceless and unaccountable who hold business in a vice-like grip.

Labour must take note. Public debate is suffused with questions of responsibility today.

Capitulation to the politics of austerity and despair is not fairness. It is an admission that the government in this country sees its job as one of stitching together capitalism, however broken it may be.

Blairite reheats do not serve working people, and will not serve our country either.

Fear follows cuts. It is fear that keeps families from spending and business from investing.

Labour has a duty to offer a confident alternative to this misery, not to fall into its embrace.

Acceptance of Osborne’s public-sector wage freeze, and now doubt over what cuts Labour will actually oppose, is not clever positioning but in fact boxing itself into a corner.

And for anyone hit in some way by welfare job or wage cuts, where can they go for an alternative?

It seems that 2012 will be the year in which our movement is once again called upon to lead the resistance.

On pensions, pay and cuts we are the alternative.

We must stand proud, we must offer hope and we must stay unified.