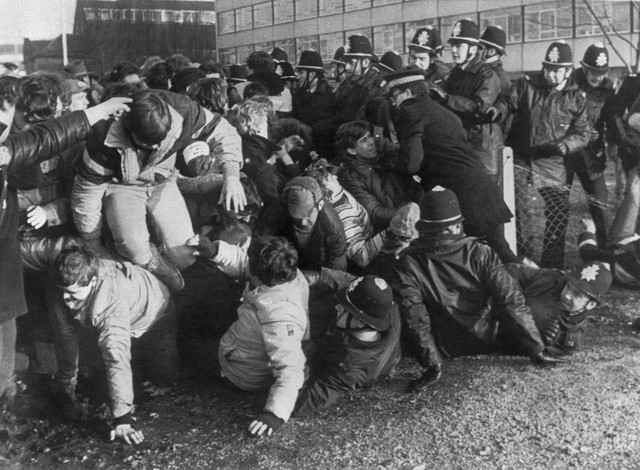 Following today’s (12th June) announcement by the IPCC the Orgreave Truth and Justice Campaign (OTJC) and the national Union of Mineworkers will be hosting an open press conference at 12.00 noon in the NUM main hall at 2 Huddersfield Road, Barnsley S70 2LS.

Press and public all welcome. Light refreshments available. Members of the audience will include miners present at Orgreave on 18th June 1984. They will be available to answer press questions afterwards.

Priority will be given to questions from members of the media and press, who should identify themselves to Mark Metcalf (07952 801783) by signing the press entrance form that will be available at the entry to the main hall.

Statements will be made by Chris Skidmore – Yorkshire Area NUM president , who was present at Orgreave in June 1984; Granville Williams – OTJC; Arthur Critchelow – Orgreave veteran

The conference will be chaired by OTJC chair Joe Rollin.

There will be regular updates on twitter at @orgreavejustice

In advance of the press conference the OTJC has issued the following statement:

“Whilst disappointed, OTJC members are not surprised that the IPCC will not be conducting a full investigation into policing at Orgreave on 18th June 1984. It was back in November 2012 that South Yorkshire Police referred itself to the IPCC, which ever since has acted slowly and conducted little independent work in assembling and collating information.

The fact that the IPCC, described – rightly in our view – by many prominent individuals as ‘not fit for purpose’, is stepping aside on Orgreave affairs will not therefore be deterring the OTJC from continuing its campaign. OTJC notes that the IPCC itself recognises in its report the limitations of what the organisation can do and that only a Hillsborough style public inquiry can eventually get to the truth.

The OTJC continues to gather increasing support from organisations and individuals for a full public inquiry into why it was that on 18th June 1984, 95 miners were arrested at Orgreave after thousands of police officers – many in riot gear, with others on horseback – brutally assaulted miners participating in a strike aimed at defending jobs and mining communities.

An inquiry will help reveal exactly why, when the subsequent court cases took place, all of the charges, including riot were abandoned. It must inevitably lead to two things. Some officers being charged with a series of offences – assault, perjury, perverting the course of justice and misconduct in a public office. Secondly, a paper trail that would indicate that the actions of the police at Orgreave were influenced by political pressure from within the highest ranks of the Government of the day”.

THE FIGHT FOR TRUTH AND JUSTICE GOES ON.