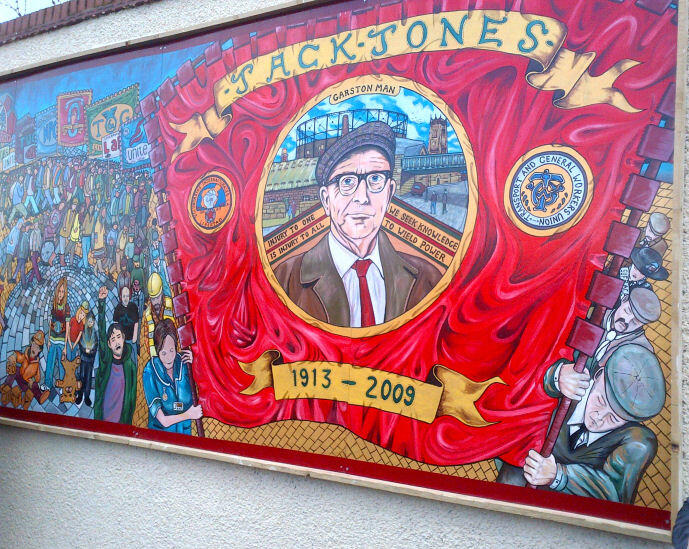 March 29th sees the centenary of Jack Jones, the greatest trade union leader of his generation.

Born in Garston, Liverpool in 1913, Jones grew up in poverty. He obtained an engineering apprenticeship but lost his job following the Wall Street Crash – which like the crisis today reverberated around the world.

He worked at a painters and signwriters before joining his father on the Liverpool Docks, where he joined the TGWU and became a shop steward and a delegate on the T&G’s National Docks Committee. At the age of 15 he was already Labour Party Branch Secretary and he later became a Labour Councillor.

In 1936 having fought Mosley’s black shirts in Liverpool, he joined the British Batallion of the International Brigades to fight in the Spanish Civil War in the Major Atlee company. He was seriously wounded in 1938 at the Battle Of Ebro.

On his return to the UK he became a full time union official in the West Midlands, launching a massive organising campaign in the stubbornly non union automotive industry, which helped swell the ranks of the TGWU in the region.

The TGWU’s membership stood at 2 million members and along with the AEEU’s Hugh Scanlon, a union with 1.5 million members, he spearheaded the shop stewards movement and established trade unions as a force to be reckoned with.

Jones and Scanlon were known as ‘the terrible twins’ and were instantly recognisable to the population at large.

In the early 1970s, Jones and Scanlon, along with the Joe Gormley of the miners union and others, and the TUCs Vic Feather were regular fixtures on television news bulletins.

As Bob Crow of the RMT recently remarked – as a youngster at the time, he could name almost every member of the TUC General Council!

Jones was so well known that in an opinion poll at the time he was regarded by 54% of those taking part as the most powerful man in the country.  This may have been a myth – but it suited the media at the time. In any event – it seemed that way.

It was during this time that I became a trade union activist, and FOC (trade union steward) working at a commercial printers in South Manchester.  Pay was falling well behind prices, inflation was rocketing and working people – irrespective of where they worked were showing militancy, many prepared to take industrial action and strike for the first time.

Upon the election of a minority Labour Government in 1974, when Heath asked the country “Who governs Britain?” and the electorate answered “Not you mate”, Jones, along with Scanlon and Feather negotiated the social contract with Labour in a deal that saw the scrapping of the Industrial Relations Act and introduced an across the board pay deal.

With effect from 1st August, 1975 pay rises were limited to a maximum flat rate increase of £6 a week, with no increase for all those earning over £8,500 a year.

Note the phrase “a maximum increase of £6”. The reality was that the £6 became ‘the norm’ and was referred to from then on in printing as ‘the Jack Jones Six Quid’. It narrowed differentials of course but the £6 policy benefitted the lower paid considerably, in particular women, for whom the Equal Pay Act 1970 had only just come into effect. .

The second stage of the social contract limited pay rises to 5%, within a range of £2.50 to £4 per week. This was the first time I had lead dispute action – to secure more than the lower band, and chapel members began taking action get the increase up – we did too!

Stage three in 1977 allowed more flexibility with pay deals settling at around 10%. But stage four saw the death knell of the social contract with a limit of 5% – excluding new money from self-financing productivity deals. In the autumn of 1978 pay agreements were reached which broke the 5% limit as inflation and prices increased. The deal eventually collapsed.

During this period it has to be recalled that Jones lead the line in securing what could be described as a post war national industrial relations settlement. ACAS was created to help solve disputes; the National Economic Development Council (Neddy) oversaw planning and industrial change; the basis of workplace justice was legally established through Industrial Tribunals and the Health & Safety at Work Act was developed. No mean feat!

Jack retired from the TGWU in 1978 and refused to take a knighthood or peerage. Instead he  became the ‘Pensioners Champion’ often seen at union marches and conferences – always on his way to speak on the behalf of pensioners.

At the TUC or Labour Party Conferences everyone would stop to shake his hand or hail him from across the road as he walked along the sea front – and Jack always give a cheery wave back.

He had become not just a trade union hero to his and subsequent generations – he became a National Treasure.